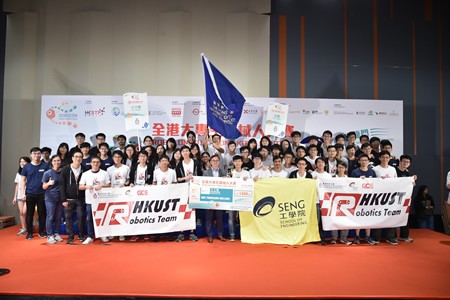 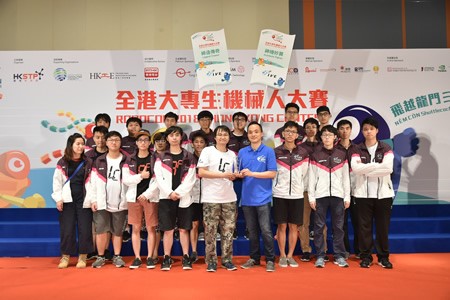 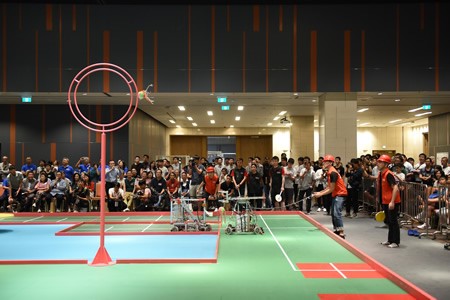 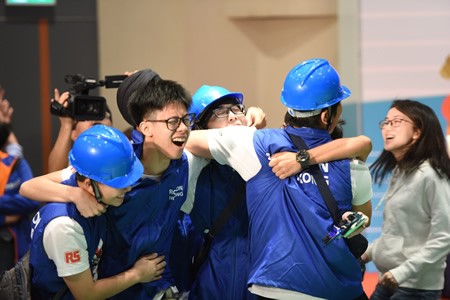 The Robocon 2018 Hong Kong Contest was held at the Hong Kong Science Park today, where 12 teams of students from 6 local tertiary and higher educational institutions competed in a series of matches for the Champion. 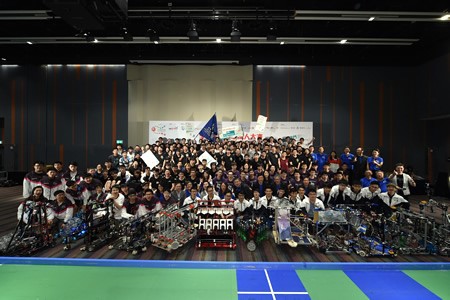 Participants in the Robocon 2018 Hong Kong Contest celebrated their achievements together.

(Hong Kong, 24 June 2018) - The Robocon 2018 Hong Kong Contest wrapped up successfully at Hong Kong Science Park today. “Fiery Dragon” from Hong Kong University of Science and Technology was named this year’s champion in a spectacular final that took place in front of around 500 spectators.

The annual Robocon contest is an opportunity for Hong Kong’s young science and engineering talent to showcase their innovative robotics design and knowledge. At the same time, the event is a platform for students to gain and exchange hands-on experience. The event also highlights the importance of Artificial Intelligence and Robotics technology and its role in contributing to the innovation and technology development in Hong Kong.

“Today’s event clearly showed that Hong Kong has creative young technologists of high caliber who are ready to take on the future of robotics and turn their ideas into reality,” said George Tee, Chief Technology Officer of HKSTP. “The teams entering this year’s competition were a solid example of how vibrant Hong Kong’s future innovation and technology sector could be. We hope Robocon will provide participants with valuable experience and inspire our future generation to put their creative energy into robotics. We will continue to groom talent for AI and robotics to bring a new wave of innovation to Hong Kong’s science and technology sector.”

“Fiery Dragon” stood out among the 12 multi-disciplinary teams from six local tertiary and higher educational institutions. With its outstanding AI and robotics knowledge, its strong coherence and passion for robotics, “Fiery Dragon” won in the final. Participants in this year’s competition were supported by HKSTP and companies with technical assistance, and hardware and software support. They also received one-year membership in the Robotics Garage, where they can bring their robotics ideas and design to life with the support of professional tools, advanced fabrication machinery and technical advisory.

This year’s Hong Kong contest was supported by The Hong Kong Institute of Engineers, Hong Kong Computer Society, and collaborative advisor Radio Television Hong Kong. Their support, as well as the active participation of tertiary and higher educational institutions, have been pivotal to this year’s success.

Inspired by a Vietnamese folk game, this year’s contest was themed “Shuttlecock Throwing”. At the start of the game, each team’s manual robot picked up the shuttlecock and handed it to the automatic robot that then moved into different zones and threw the shuttlecock in rings. If the automatic robot succeeded in throwing a golden shuttlecock through the golden ring to land on the golden plate, the team would win that game. This year’s champion will represent Hong Kong at the ABU Asia-Pacific Robot Contest 2018, which will be held in Vietnam in August. For the list of winning teams in Robocon 2018 Hong Kong Contest, please refer to the Appendix.