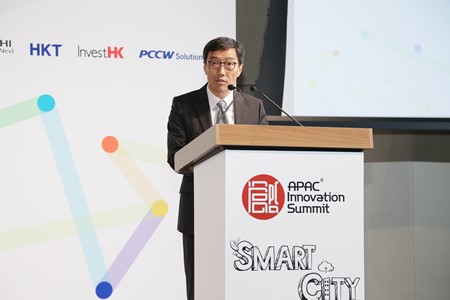 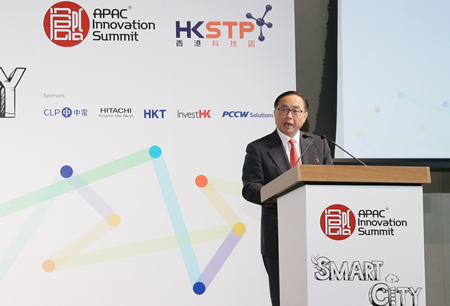 Nicholas Yang, JP, the Secretary for Innovation and Technology, applauded HKSTP’s Open Data Studio for helping to nurture the next generation of innovators in the knowledge-based economy. 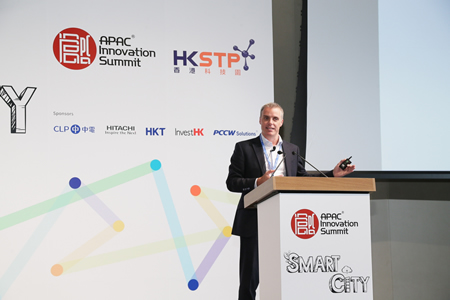 Andrew Collinge of Greater London Authority said open data encourages developers to come up with innovations at much greater speed and impact than the public sector could achieve. 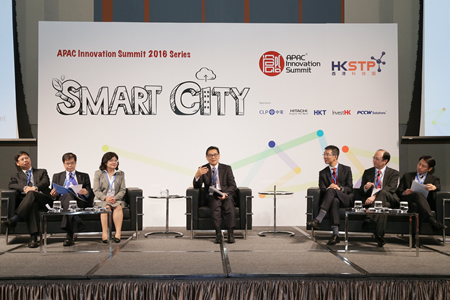 (Hong Kong, 26 September 2016) - The vision of Smart City was crystalised in the latest APAC Innovation Summit (AIS), organised by Hong Kong Science and Technology Parks Corporation (HKSTP) to drive collaboration of local and international innovation ecosystems and to catalyse the development of Hong Kong towards an even smarter future.

In the Summit themed Smart City, the fourth in the 2016 AIS series, the need to build an integrated data infrastructure and for open data sharing for smart city development was underscored, supported by successful smart city experiences in London, Stockholm and Japan’s Kashiwa-no-ha.

Opening the Summit, HKSTP CEO Albert Wong challenged thought leaders to turn ideas to reality, and explore possibilities such as using Hong Kong Science Park and the Chinese University of Hong Kong, that together have a population of close to 40,000 people within 2 km, as a smart city testbed. “The source of wealth in the new era of imagination comes from having the guts to make imagination work and the capabilities to turn imagination into reality,” he said.

The two-day Summit on September 22-23 with an attendance of over 1,000, attended by Hong Kong government officials, senior executives of major Hong Kong corporations as well as local and overseas specialists in innovation and technology, packed in an array of presentations from international and local organisations and companies sharing smart city solutions and projects, as well as nearly 250 business matching sessions for local and international participants to collaborate on turning smart city ideas into reality.

London, which has pioneered a London infrastructure mapping application that shows 12,000 data points of London infrastructure encompassing all the projects from 2015-2050 to help developers and planners visualise the city’s upcoming development so as to take advantage of potential business opportunities, has demonstrated great success in opening up data.

Citing another successful example in London’s transport, Andrew Collinge, Assistant Director, Intelligence and Analysis, Greater London Authority, said that the 5,000 developers on London’s list have created some 350 apps powered by the data that Transport for London has released, at much greater speed and impact than the public sector could ever achieve. “By releasing the data, we encourage developers in the market to do things that undoubtedly help the citizens of the city navigate their way around public services and enjoy a better quality of life,” he said. “A Deloitte study shows that the data released by Transport for London save passengers 58 million pounds sterling per annum in time, against the small investment made by Transport for London that was required to release that data.”

His colleague, Dr Larissa Romualdo-Suzuki, Senior Project Manager, Economic and Business Policy Unit of Greater London Authority, said data should be considered as “infrastructure, like transport and energy, that no one can live without”.

A well-regarded data strategist, Ms Romualdo-Suzuki cut through the complexity of the data landscape to map out a seamless data supply chain that gives users the tools to manipulate and visualise data and collaborate with others to create a value network. “Not all data user are data scientists, so it’s important to lower the knowledge required to process the data to connect with your API, to understand what your data is about. You have to treat your end-users your customers,” she said, using the London infrastructure mapping application as an example.

Sweden, aspiring to be a global centre of excellence of smart city and currently home to 25,000 technology companies and founders of major IT brands such as Spotify and Skype, shows that collaboration between the public sector, academics, industries and the community at large is crucial to achieving its vision of becoming socially, financially, ecologically and democratically sustainable by 2040.

Dr Olga Kordas, Director of the Energy Platform at KTH Royal Institute of Technology, who led a Swedish delegation to join the AIS business matching, said Sweden is open to collaboration with Hong Kong. “We need international testbeds and international experimentation to see how the solutions developed in Sweden would work in Hong Kong and vice versa,” she said.

From their positions to drive smarter development in Hong Kong, the government officials agreed that open data is a key step for going forward. Allen Yeung, Government Chief Information Officer, said more open data will be provided in a form that can be much better for extracted for use directly. “Data.gov.hk would be characterised as generation one of open data which is a collection of data already available in different formats. We are moving to generation two. We try to make as many as those data sets under more XML or JSON-based formats so you can directly consume the information. At the same time, we also invite more government departments to put in more relevant information and also encourage public and private contribution to the same portal,” he said.

HKSTP also plays a key role in providing an open data platform to catalyse smart city development. HKSTP’s CEO Mr Wong announced at the Summit that HKSTP has soft launched an Open Data Studio in Science Park. “We will invite public institutions and private organisations to contribute live data to the studio so that local and international developers can draw correlations out of the data to come up with new innovative solutions.”

Supporting the data studio in his opening speech for the Summit, Nicholas Yang, JP, the Secretary for Innovation and Technology, said the setting up of the data studio “will help nurture the next generation of innovators in the knowledge-based economy and contribute to the smart city ecosystem”.