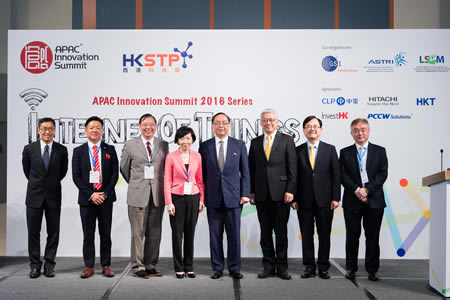 Nicholas Yang, Secretary for Innovation and Technology (4th to the right); The Hon. Fanny Law, Chairperson of HKSTP (4th to the left) and Allen Ma, CEO of HKSTP (2nd to the right) are the officiating guests in the first conference themed “Internet of Things” (IoT) under the APAC Innovation Summit 2016 Series. 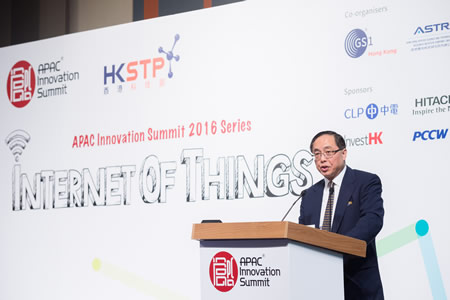 Nicholas Yang, Secretary for Innovation and Technology believed that Hong Kong is equipped with necessary components to develop IoT and is ready to propel re-industrialisation. 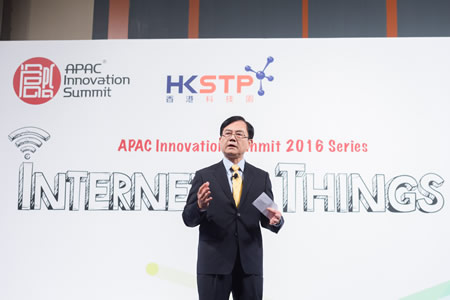 Allen Ma, CEO of HKSTP said in his welcome address, “one plus one can be much more than two, thanks to the power of collaboration,” stressing that collaboration, whether between humans or  machines, is what can take the world forward.

(Hong Kong, 8 April 2016) - The APAC Innovation Summit 2016 Series organised by the Hong Kong Science and Technology Parks Corporation (“HKSTP”) had its first conference themed “Internet of Things” (IoT) at Hong Kong Science Park between 7 and 8 April with an attendance of over 900, serving as a platform for knowledge exchange and exploration of how IoT technology can foster intelligent manufacturing and in turn “re-industrialisation” for Hong Kong.

At the two-day conference, a series of presentations were shared detailing where IoT development stands today and analysing its prospects. It is clear that IoT has a solid foundation in Hong Kong’s industrial sector and that more and more daily necessities are interconnected and benefiting lives.

Speakers and those attended the conference exchanged valuable insights on how IoT-enabled modern production modes and lifestyle are going to see the emergence of many “intelligent machines”. The facts and data shared, if optimised and applied, are of critical value to advancing Hong Kong’s new economic focus “re-industrialisation” and can greatly benefit the city.

In his welcome address at the conference, Allen Ma, Chief Executive Officer of HKSTP, pointed out that Hong Kong is focusing on the development of three major technology platforms, namely robotics, Smart City and Healthy Ageing, and IoT has been a driving force in these areas, among others. “One plus one can be much more than two, thanks to the power of collaboration,” he said.

Mr Ma stressed that collaboration, whether between humans or  machines, is what can take the world forward. “One can see himself as but a drop of water,” he said, “the thing is when drops of water come together, we have an ocean that can power waves of technological advancement.”

Nicholas Yang, JP, Secretary for Innovation and Technology, agreed that Hong Kong has all the right conditions for using IoT to innovate.   “We can leverage Hong Kong’s advantages including her excellent legal system and respect for and measures to protect intellectual property rights, her outstanding R&D talent in universities and technology research institutions, as well as the expertise and experience of local industrialists. Furthermore, with the huge market in neighbouring Mainland China and the many plusses of ‘One Country Two Systems’ working in her favour, Hong Kong has all of what it takes to develop innovative technologies,” he said.

Mr Yang sees IoT development  vital to Hong Kong’s future. “I believe the application of IoT technologies is critical in the process of re-industrialisation in Hong Kong.” He continued, “Hong Kong, as an international trade and financial centre, has unique advantages that allow her to pursue research on innovative technologies and application of IoT.”

IoT technology is priceless to businesses and has tremendous market potentials. “Internet of Things can be huge!” said Chris Ip, Senior Partner (Hong Kong) of McKinsey & Company at the conference. “We should look at the value of IoT to businesses and push to widen its applications. In addition, just having the technology alone is not enough, what needs to be done is to marry it with the right business models for realising its true value and creating wealth with it.

“We are presented with a super important opportunity, and it’s just a start.” While many people associate IoT with wearable devices and smart home applications, Mr Ip said 70% of its value actually lies in corporate applications. He continued, “The technology has been around for a long time and well known with some of the concepts already in use for 20 or 30 years, it is just not used in scale.”

Mr Ip also stressed that there are inseparable ties between IoT and re-industrialisation and the local manufacturing industry could see the return of glorious days. “We believe an advanced and innovative manufacturing sector is still instrumental to Hong Kong’s competitiveness and economic development,” he said.

Another speaker Li Beiguang, Deputy Director General Department of Planning Ministry of Industry and Information Technology of the People's Republic of China, said, “Like Hong Kong, Mainland China is also concerned about the prospects of her manufacturing industry, thus has been pushing for reform and upgrade. The country announced the ‘Chinese Manufacturing 2025’ plan last year indicating her commitment to see the industry move toward the high-end in the next 10 years.” He said, “Re-industrialisation requires the penetration and integration of new technologies into manufacturing and revolutionary change in manufacturing modes starting with the production tools. The "Chinese Manufacturing 2025" plan has five emphases – driven by innovation, quality first, green development, structural optimisation and talent, corresponding to the five major issues that the country’s manufacturing industry faces. The industry is the battlefield where innovative technologies compete and demonstrate their winning capabilities!”

Development of robotics worldwide is the highlight in June