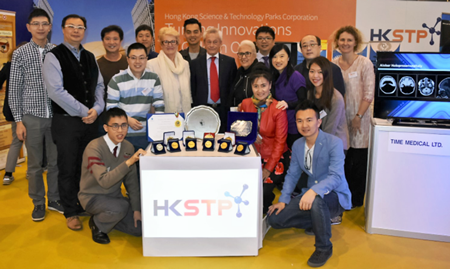 All seven members of the Hong Kong Science and Technology Parks Corporation delegation bring home with outstanding achievements in the 44th International Exhibition of Inventions of Geneva.

(Hong Kong, 20 April 2016) - At this year’s International Exhibition of Inventions of Geneva, the largest of its kind in the world, held between 13th and 17th this month, all the six companies in the Hong Kong Science and Technology Parks Corporation (“HKSTP”) led team won awards, including one of the top four awards, Romania award and four gold and two silver medals, for their debut innovations and invention.

The State of Geneva award, among the top four commendations at the event, together with a Gold Medal went to Time Medical Limited for its world-first NEONA MRI for babies. Sanwa BioTech Limited received a special award from the Romania and Gold Medal for its portable and quick sample-to-result vitro diagnostic platform that operates on integrated microfluidic biochips technology. Oper Technology Limited, for its patented Autologous Neural Stem Cell Harvest that promises safe and precise extraction of neural stem cells of live subjects, and China Vanguard Group Limited, for its location-based out of home advertising system using iBeacon technology and precision indoor system using ultra-wide-band and Bluetooth technology, won Gold Medal. And, Nano and Advanced Materials Institute Limited and The New Green Holdings Limited, the former for its breathable and bactericidal N99-qualified nanofibre facemask and latter for its Hydroponic technology-enabled HealthFarm for growing Greens indoor, received Silver Medal.
That’s not all. An affiliate student member of the HKSTP team, Wong Sum Ming from the Church of Christ in China Tam Lee Lai Fun Memorial Secondary School, was also awarded a Gold Medal for a self-disinfecting door handle – a glass handle coated in titanium dioxide, powered by a self-charging dynamo and kills germs with UV light. It is the first time HKSPT brought a student affiliate to the Geneva Awards and a first Hong Kong student win at the Awards. This invention of Wong and his team is among the displays at the SmartLiving@Science Park Exhibition at Hong Kong Science Park.

These winning works represent the efforts of HKSTP companies to help address issues of worldwide importance in areas including health and medical care, the environment and access to information.  They clearly indicated that HKSTP companies hold close to their hearts the problems humanity faces and are dedicated to applying their exceptional innovative capabilities to help solve those problems and benefit mankind as well as planet earth.

Allen Ma, Chief Executive Officer of HKSTP, said, “We are proud of our incubatees and partner companies for their achievements at the event, but even more so for Hong Kong with all her 31 participating projects receiving commendations including two of the top awards – the State of Geneva award won by Time Medical and also the Grand Prix by Hong Kong Baptist University, speaking volume to the competence of Hong Kong in innovation and technological research and development. HKSTP is glad to have played its part in facilitating technopreneurs in their R&D pursuits and promises to continue to support them with its comprehensive suite of services that they may see their R&D works to fruition as successful products.”

In its 44th year, the annual International Exhibition of Inventions of Geneva has the patronage of the World Intellectual Property Organization (WIPO) of the Swiss Government and City of Geneva and is the largest event of its type in the world. It serves as a platform for companies, universities and technological institutions from around the world to showcase their innovations and inventions to the global media and thousands of potential business contacts. This year 695 exhibitors from 40 countries attended and their works were graded by an international jury of 85 experts for different awards standing as labels for quality.