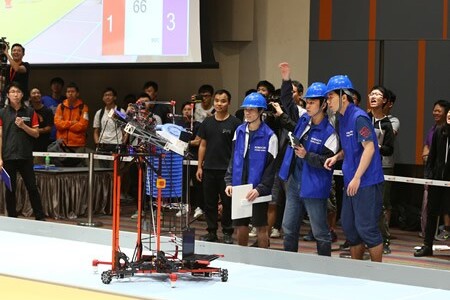 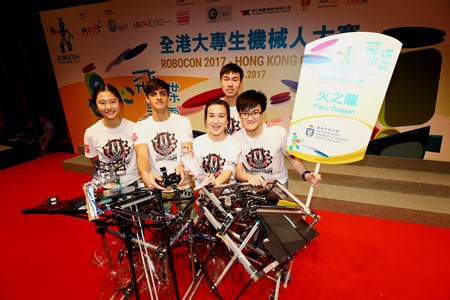 Following rounds of exciting competition, Fiery Dragon from The Hong Kong University of Science and Technology scored the highest marks and won champion of the Robocon 2017 Hong Kong Contest. 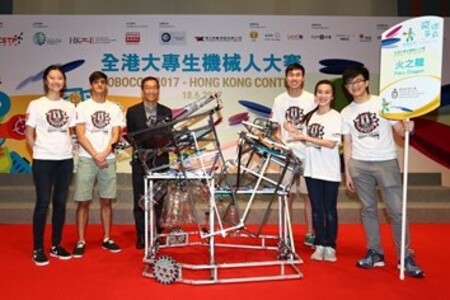 Albert Wong, Chief Executive Officer of HKSTP, congratulates the winning team, Fiery Dragon of the Hong Kong University of Science and Technology, and encourages them to continue their efforts in robotics development.

(Hong Kong, 18 June 2017) - The Robocon 2017 Hong Kong Contest was concluded successfully at Hong Kong Science Park today. Fiery Dragon from The Hong Kong University of Science and Technology took the crown of this year’s champion after winning a hard-fought final of an event attracting largest number of teams than in previous years that showcased both ambition and sophisticated innovation capabilities, highlighting the city’s growing status as a hub for robotics development, according to the organiser Hong Kong Science and Technology Parks Corporation (HKSTP).

Record high level of participation from all teams

"The event was the culmination of almost a year of work from the 12 teams. I am glad to see the enthusiasm and robotics expertise of the students here today, which speaks volumes for the ever-growing strength of Hong Kong's robotics development and technology talent pool. This year, I am particularly impressed by the wide application of software technologies such as artificial intelligence (A.I.) and how they were well-integrated in many teams' robots. The quality and intelligence of robots are unprecedented. All participants have proved that Hong Kong has a large number of high caliber technology talent with good knowledge in robotics development and application; this is a good sign as they represent a strong impeller to our innovation and technology ecosystem. We call for more collaborative support from various stakeholders in the society to help increase the next generation's innovative enthusiasm and broaden their practical experience in robotics so that they can start their innovation journey at their younger age,” said Albert Wong, Chief Executive Officer of HKSTP.

"Robotics plays an important role in defining the future of Hong Kong's industries.  I am very confident that with the city's vibrant and resourceful innovation and technology ecosystem, technology talent and technopreneurial flair, the city will succeed in making robotics an important part of our transformation into an innovation-led economy," continued Albert.

Accelerating the growth of robotics in Hong Kong

Albert praised the efforts of the co-organisers of the Robocon 2017 Hong Kong Contest, namely The Hong Kong Institution of Engineers and Hong Kong Computer Society, and collaborative adviser Radio Television Hong Kong as well as participating universities and education institutions, saying that all teams received a higher level of support this year. Universities and education institutions gave students access to laboratories and other facilities during the long process of designing, building, testing and refining their robots, while some academic departments also provided financial support.

HKSTP actively supported student teams to prepare for the contest by providing hands-on technical support for students in collaboration with technology companies in Hong Kong Science Park. Students gained access to development kits and other equipment and technologies, and received trainings in engineering, electronics and A.I. All these contribute to the goal of increasing the city’s potential to become a hub for robotics development.

All Robocon 2017 Hong Kong Contest participants also receive one-year membership to Robotics Garage, a makerspace for robotics fabrication at Hong Kong Science Park, which is designed for technology-focused entrepreneurs. Students will be supported to realise their robotics-related projects and ideas, with access to a range of workshops, professional-grade tools, advanced fabrication machinery and technical support staff. HKSTP has connected technology companies from Hong Kong Science Park as well as its industry partner, namely Arrow Electronics Inc., Insight Robotics Limited, Intelligent CAD/CAM Technology Limited and Lanco Integrated Asia, to provide guidance and support to today’s winning team, Fiery Dragon, with an aim to enhancing their robot; so as to help the team excel when they represent Hong Kong to compete at ABU Robocon 2017 in Tokyo in August.

Robotics is one of the technology application platforms that HKSTP has been actively driving. To further accelerate the continued growth of Hong Kong's robotics talent, HKSTP has teamed up with the Robot Institute of Hong Kong to launch the BeyondRobot Education Certificate Programme (BECP) this year. The programme aims to train more than 60 university students to be the trainers who can equip young minds from secondary schools to gain a better understanding of the latest technology and design and make their own robots through hands-on exercises. The first batch of 20 university students will be selected from the participants of the Robocon 2017 Hong Kong Contest. The secondary school students participating in BECP will gain practical skills in robotics and programming and compete in the "Mini Robocon" which will be organised under BECP. More than 900 students from 50 secondary schools are expected to benefit from the BECP in the next five years to 2022.

Themed with a Japanese-inspired idea, The Landing Disc, Robocon 2017 Hong Kong Contest emphasised the robots' intelligence and adaptability. Facing each other in paired competition, the robots had to land discs on targets of varying heights. Robots have to shoot down the beach ball placed on each target by landing discs, and won by being the first to cover each of the seven targets or by successfully scoring more with landing discs than their opponent.  For the list of winning teams of Robocon 2017 Hong Kong Contest, please refer to Appendix.