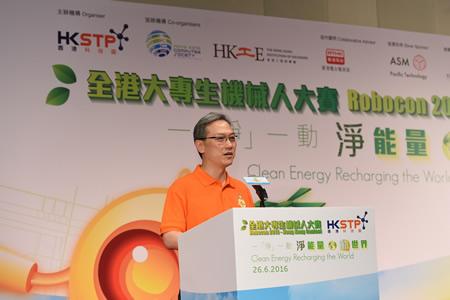 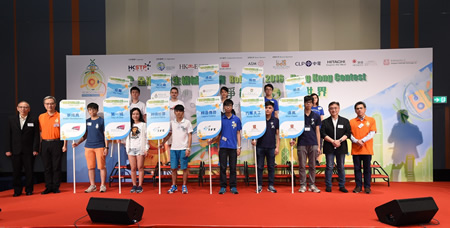 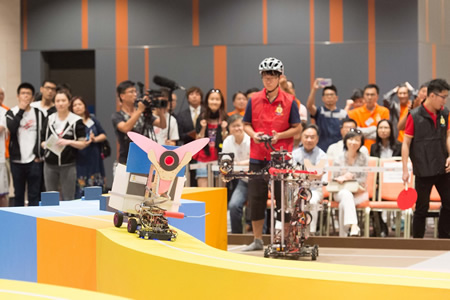 The Robocon 2016 Hong Kong Contest was held at the Hong Kong Science Park today, where 11 teams of students from 6 local universities and institutions competed in a series of matches for the Champion.

“Power Shuttle” from The Chinese University of Hong Kong, Department of Mechanical and Automation Engineering received the highest overall score in the Contest and was crowned the 2016 Champion. The champion team earned the right to represent Hong Kong to compete at the ABU Asia-Pacific Robot Contest (ABU Robocon) on 21 August 2016 in Bangkok, Thailand.

The 11 student teams from local universities and institutions who participated in the Robocon 2016 Hong Kong Contest celebrated their achievements together and congratulated each other at the prize presentation ceremony.

(Hong Kong, 26 June 2016) - Hong Kong Science and Technology Parks Corporation (“HKSTP”), in collaboration with co-organisers The Hong Kong Institution of Engineers (“HKIE”) and Hong Kong Computer Society (“HKCS”), and collaborative adviser Radio Television Hong Kong, organised the Robocon 2016 Hong Kong Contest (the Contest) held at the Science Park today. “Power Shuttle” from The Chinese University of Hong Kong received the highest overall score among the 11 participating teams of ambitious engineering and information technology students from local universities and institutions, and was crowned the 2016 Champion. The champion of the Contest earned the right to represent Hong Kong to compete at the ABU Asia-Pacific Robot Contest (ABU Robocon), which will be held on 21 August 2016 in Bangkok, Thailand. All the participants of the Contest will be entitled to a one-year free membership for Robotics Garage, sponsored by HKSTP, where they can access a range of collaborative robots, necessary tools and professional guidance to realise their robotics-related projects and ideas.

“Hong Kong has embarked on a transformation journey towards an innovation-led economy and society, and is driving towards re-industrialisation where the Robotics technology platform plays an important part for Hong Kong’s success,” said Ir Dr. H.L. Yiu, Chairperson of the Robocon 2016 Hong Kong Contest Organising Committee and Head of the Electronics Cluster of HKSTP. “The Robocon 2016 Hong Kong Contest is a great demonstration of the capabilities of Hong Kong students, their innovative talents and STEM (Science, Technology, Engineering and Mathematics) knowledge and passion. From this contest, we see that there are many young people in the city who are ready to provide a great impetus for transforming Hong Kong.”

This year, the theme of “Clean Energy Recharging the World” was selected with the aim of raising awareness of efficient energy consumption and clean and renewable energy utilisation. To bring this theme to life, each participating team developed two robots, an Eco Robot and a Hybrid Robot, to overcome a series of interesting challenges. In 3-minute rounds, the Eco Robot and the Hybrid Robot from two competing teams ran along on a path comprising three zones, namely, “Slopes and Hills”, “River”, and “Down Hill”. Without an actuator to drive it, the Eco Robot carrying a “Wind Turbine Propeller” was supported by only one steering actuator to control its direction. The Hybrid Robot was required to assist the Eco Robot to complete the challenge by providing green driving energy, such as wind and magnetic force. After the Eco Robot reached the wind turbine station, the Hybrid Robot had to take the wind propeller from the Eco Robot and then mount it in a wind engine atop the wind turbine tower. The team that successfully assembled the wind propeller in the shortest time won the game, and total scores were tallied for their results in each round of games.

Robocon is a prestigious programme to cultivate young people’s interest and curiosity in developing applications by leveraging on electronic, mechanical, automation and information technologies – a real integration of Science, Technology, Engineering and Mathematics (STEM). “We sincerely appreciate the HKIE for providing more than 45 engineers to contribute voluntarily in organising the event; and we are also glad to have the support from Ir Dr. Chan Fuk Cheung, Past President of the HKIE all along,” said Andrew Young, Chief Commercial Officer of HKSTP. “The engineers have a diverse spectrum of expertise, coming from the HKIE Control, Automation & Instrumentation Division, Electronics Division, Information Technology Division and Mechanical, Marine, Naval Architecture & Chemical Division to serve as Panel of Judges and Technical Advisory Committee. “Their strong support fully demonstrates HKIE’s enthusiasm and dedication to nurture the young generation and explore their talents to meet our society needs.”

Mr. Young continued, “We are also grateful to have the support from HKCS’s team under the leadership of Mr. Michael Leung, President of HKCS, to assist in organising and promoting the Contest. We are seeing an increasing trend of applying multidisciplinary technologies across programming, Internet of Things (IoT), data analytics and sensors for the construction of robots, which are essential skills that students learn from STEM.”

The Contest came down to a heart-pounding conclusion with a close game of 15, with “Power Shuttle” from The Chinese University of Hong Kong demonstrating the greatest skills, knowledge and creativity in engineering and information technology that empowered them to beat the first runner-up, “Fiery Dragon” from The Hong Kong University of Science and Technology in the final.

The Robocon Hong Kong Contest is a longstanding annual robotics contest where teams comprised of post-secondary students and instructors from Engineering and Information Technology courses compete in a series of predetermined activities with robots designed and built by the participants to demonstrate their engineering skills. The Contest serves as a crucial opportunity to further cultivate the technopreneurial dreams of future successful start-ups, a channel to help transfer potential research projects from the universities into marketable products that can benefit all mankind, and a platform to show that the young talents in Hong Kong are ready to help shape a brighter future for Hong Kong.