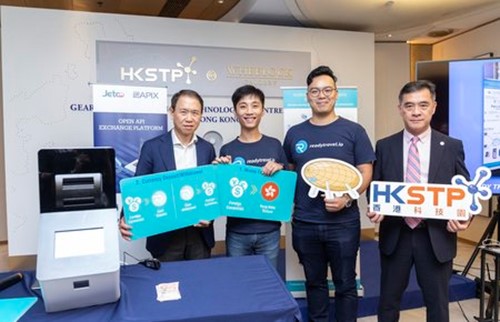 Guests celebrating the launch of ReadyApp and ReadyKiosk, an AI-driven and blockchain-powered FX swapping platform, developed by Pecutus. From left: 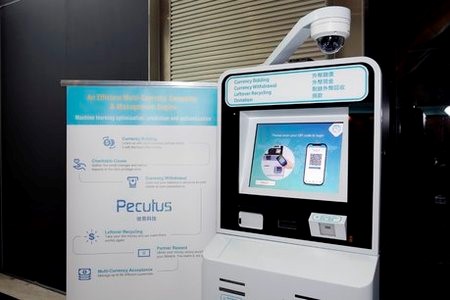 Building on a wildly successful beta phase, Pecutus unveiled its first physical kiosk for P2P FX deposit and withdrawal at Hong Kong Science Park Building 5W in July 2019. The kiosk, debuting under HKSTP’s First@Science Park Programme, is Pecutus’first step in the expansion of its global network of FX swap kiosks. The kiosk will make good use of the HKSTP location as a live testing ground to collect feedback and data.

Victor Yip, Co-founder of Pecutus said, “Pecutus is ecstatic about the soft launch of our very first physical FX processing kiosk (ReadyKiosk) which represents a key component in the ReadyTravel FX swapping platform. In time, these kiosks will be found in major ports of entry and exit worldwide to make App-arranged currency swaps easier than picking up a cup of coffee.”

Nearly 90 percent of all travellers have to contend with an average of more than US$100 in leftover foreign currency after trips, according to a February 2018 VISA survey, and less than 30 percent of travellers manage to convert their leftover foreign currency upon return. ReadyTravel’s primary audience is the burgeoning tech-savvy millennial traveller segment which is expected to spend a combined US$250 billion in 2020.

Angus Choi, Chief Executive Officer of JETCO said, "We are very pleased to have ReadyTravel as one of our API Trusted Service Partners (TSP) and cooperating with JETCO. We have more than ten member banks in Hong Kong using JETCO APIX connected through their multiple banks’ API systems, bringing new and convenient foreign currency experience to customers. With reference to the banks’ foreign currency rates, ReadyTravel can have more data for algorithmic trading which increases the speed at which it can quote market prices, while simultaneously reducing the transaction costs. Besides, it can reduce their risk exposure.”

ReadyTravel allows travellers to swap up to 80 foreign currencies with other users through one-off and multi-party transactions backed by blockchain verification and accountability. Rates are calculated in real time through the AI-powered ReadySwap Intelligence which calculates the platform’s multi-currency allocations, banknote verification and ledger processing.

The expansion of ReadyTravel’s P2P reach is followed by a Fast Payment System (FPS) integration to connect with banks andStored Value Facilities (SVF) in Hong Kong, as well as a Business-to-Business (B2B) phase through ReadyLite annual enterprise subscriptions. ReadyLite is a tabletop cash processor that enables multi-currency acceptance at merchants.

Peter Mok, Head of Incubation & Acceleration Programmes of HKSTP said, “Fintech is one of the  technology focus areas of HKSTP, and for Hong Kong, as an international financial centre. Pecutus’ first deployment through our First@Science Park Programme is a major milestone for the start-up who has benefited from HKSTP’s incubation and acceleration programmes.”

“Our showcase of park companies’ technologies and solutions like the ReadyTravel is yet another example of our on-site integration and testing advantages which provides live data and feedback. It is one of our most popular initiatives and the ReadyTravel is among a multitude of disruptive technologies which got their start at First@Science Park,” Peter added.

Pecutus is helmed by founders, Victor Yip, Edward Leung and Cynthia Cheung who blend their expertise in machine learning, finance, manufacturing and marketing to help do away with piles of leftover foreign exchange.

Victor said, “Incu-Tech’s array of business and professional support is a major boon to tech companies moving beyond the inception stage. Pecutus was able to leverage the incubation programme for conferences and mentorships and it took our team to five countries. We’re a travel-oriented company and the ability to go around the world and meet an international audience was essential in tailoring our solutions for front-end customer engagement and back-end logistics. These international trips to the UK, Canada and Thailand and the people we were connected with were invaluable in the development of our platform.”