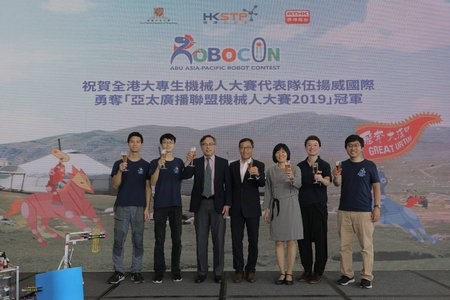 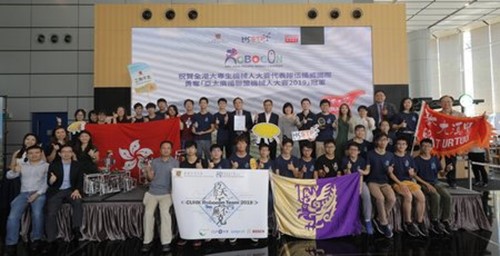 Phantom Dancer represented Hong Kong and faced off against 16 other teams at the prestigious robotics championship after emerging victorious at the Robocon 2019 Hong Kong Contest in June.

(Hong Kong, 18 Sep 2019) – Hong Kong Science and Technology Parks Corporation (HKSTP) is proud to announce that the winning team from the Robocon 2019 Hong Kong competition, Phantom Dancer, from the Chinese University of Hong Kong (CUHK), has taken the top spot at the regional ABU Asia-Pacific Robot Contest, held in Mongolia on August 25.

This marks the first time a Hong Kong team has topped the podium at the prestigious robotics championship that first began in 2002.Phantom Dancer earned the honour to represent Hong Kong after emerging victorious against a record of 13 other teams from seven tertiary institutions at the Hong Kong Robocon 2019 competition, held last June.

At the competition held in Ulaanbaatar, the capital of Mongolia, Phantom Dancer faced off against 16 teams coming from mainland China, Mongolia, India, Sri Lanka, Japan, Egypt, Pakistan, Indonesia, Nepal, Fiji, Cambodia, Thailand, Malaysia and Kazakhstan. Contestants were challenged to build one manual and one automatic robotic prototype that have to execute a range of tasks over a miniature Mongolian landscape within three minutes, to demonstrate their technical and physical capabilities.

Albert Wong, CEO of HKSTP, congratulated Phantom Dancer on the ground-breaking success in a competition contested by the best of the best. “Phantom Dancer has made the entire Hong Kong innovation and technology (I&T) community proud.  Our champions come from CUHK, a world class university.  Tertiary education is a critical element to the development of Innovation and Technology.  The Science Park will continue to play our part, working with local world-class universities, in providing platforms for talents to flourish”.

Phantom Dancer is the first Hong Kong team to win this international trophy for robotics since the game began in 2002. Professor Martin D. F. Wong, Dean of Engineering, CUHK, remarked, “The victory signifies CUHK’s education quality in robotic design and innovation. The Faculty of Engineering plays an important role in both engineering education and technological development. I take pride in our student team’s achievement in both the regional and international Robocon. It is not only about their hard work paying off, but also that our world-class education gets recognised. I sincerely hope that our students will continue to strive for the best and create legends.”

Miss Chan Man Kuen, Deputy Director of Broadcasting of RTHK said, “Radio Television Hong Kong (RTHK), as a member of Asia-Pacific Broadcasting Union (ABU), has participated ABU Robocon since 2004. RTHK organised Robocon Hong Kong Contest and produced special TV programme since 2004. The aim of Robocon is to inspire and stimulate students' interests in robotics, artificial intelligence and STEM topics. RTHK participated in Robocon in different roles throughout these years and produced special TV programmes of local and international contests every year which could spread the idea of Robocon to the public. One-hour documentary of the International Contest, ABU Robocon 2019, will be broadcast on 5th October, 2019 (Saturday) at 7:05pm on TV31 Channel of RTHK.”

This year’s ABU Asia-Pacific Robot Contest was themed “Great Urtuu” as a tribute to a Mongolian messenger system. Besides the CUHK team, the two runners up from the University of Hong Kong and the University of Science and Technology at the Robocon 2019 Hong Kong Contest were invited to witness the competition.