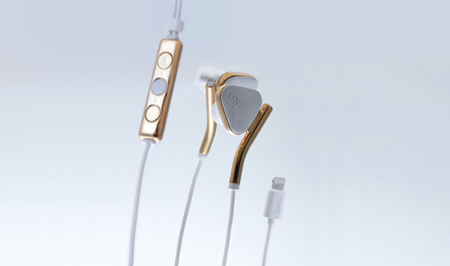 The award-winning technology, WBD101’s patented innovation ActivHearts™  has recently been adopted by smart earphone developer Actywell branded ONE. The product has also been launched on Kickstarter just last month.

(Hong Kong, 9 November 2016) - Well Being Digital (“WBD101”), a graduated incubatee of Hong Kong Science and Technology Parks Corporation has made headlines again with its award-winning heart-rate measuring wearable technology pocketing more prestigious international awards and being adopted by smart earphones developer to create device that can run playlists of stress-relieving inspirational music corresponding to the wearer’s bio-stats such as heart rate.

WBD101’s patented innovation ActivHearts™ uses multiple sensors technology and longer wavelengths optical sensors such as infra-red to captures accurate, up-to-date biometric information about the user’s body when in motion and relays the data through a smartphone app. Users with the app can view information such as their heart rate and maximal oxygen uptake, and use the data to tailor their exercise to get the best health benefits.

ActivHearts™, already named The Best Wearable Mobile Technology Award in the Global Mobile Awards (“Glomo Awards”) 2016 earlier this year, has recently been granted a merit award in the 2016 ICT World Award organized by the World Information Technology And Services Alliance (“WITSA”). WITSA is a leading authority of the global ICT industry, with members from 80 countries and claims to represent more than 90 per cent of the world ICT market.

The award-winning technology has recently been adopted by smart earphone developer Actywell. The new “bio-feedback” device branded ONE is a plug-and-play wearable that autonomously compiles music playlists by picking inspiring music most in tune with the wearer’s state of well-being, using the technology for sensing motions and bio-data such as heart rate. It was awarded a special mention of “Excellent Product Design, Medical” in the German Design Award 2017, which is designed to celebrate projects that are pioneering and show promises of commercial success. The product has also been launched on Kickstarter just last month with delivery expected in end 2016.

Hong Kong Science and Technology Park Corporation (HKSTP) congratulates WBD101, an alumnus of HKSTP’s incubation programme, for winning the awards and reaching the critical milestone of successfully turning its innovation into an alluring wearable product with promising market potential.
“Our award-winning incubatee is well poised to scale up, leveraging the R&D and the go-to-market ecosystem of Hong Kong with the support of HKSTP. We are happy to see Well Being Digital establishing a firm foothold in the international wearable technology landscape and gains the momentum to scale up!” said HKSTP Chief Commercial Officer, Andrew Young.

Well Being Digital is also thankful that Hong Kong Science Park has provided it a springboard to the world stage.

“We had gained valuable learning through HKSTP’s incubation programme. We have come a long way since graduating from that programme. It is a major milestone to have the technology adapted into a wearable device that helps the health-conscious monitor their bio-data and stress level while at the same time smartly picks the right inspiring music for the wearer,” said Kow Ping, Director and Co-founder of Well Being Digital Ltd.

“The latest international awards once again reaffirm that ActivHearts™ is a practical innovation that gives users the power to monitor their own well-being We anticipate even wider application of the technology in wearable devices for different categories of potential users,” Wallace Wong, CTO & Founder of Well Being Digital Ltd.