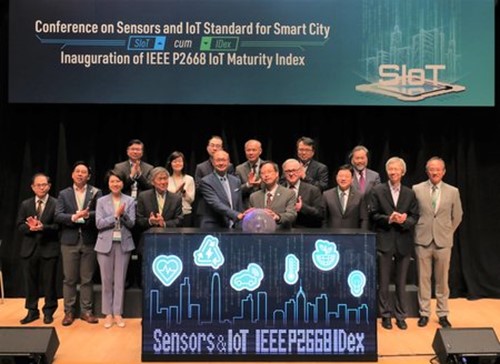 Hong Kong, 26 August 2019 – Hong Kong Science and Technology Parks Corporation (HKSTP) today hosted the Conference on Sensors and IoT (SIoT) Standard for Smart City (the Conference) at Hong Kong Science Park. The Conference aimed to promote the wide adoption of SIoT technologies and accelerate the development of smart city solutions in Hong Kong. At the event, the IEEE P2668 Standard for IoT Maturity Index (IDex), an international indicator aimed at quantifying the performance of IoT objects, was announced.

SIoT, an essential technological element that drives smart city projects, is commonly applied in various industries: retail, transportation, construction, environmental management and healthcare, to name a few. As one of the featured programmes of HKSTP’s Electronics Month, the Conference brought together over 200 global stakeholders from academia and industry to exchange knowledge and experience on successful SIoT applications, and discuss the emerging technologies, trends and market needs of this sector. The Conference also raised the importance of implementing industrial standards to evaluate the IoT objects performance.

Ir Peter Yeung, Head of Electronics and ICT Clusters, Smart City Platform of HKSTP, said, “HKSTP has been taking the lead in promoting SIoT development and applications. Currently there are over 100 Park companies involved in the R&D of the related devices and solutions. Serving as a smart campus, Science Park provides them a real environment to pilot their technologies through our Sensor Hub initiative, which in turn accelerates the commercialisation of these solutions.

HKSTP is honoured that IEEE Standards Association inaugurated its new international IDex at the Conference today. With the introduction of IDex, technology developers are able to compare the IoT objects performance based on the IDex ranking and adopt the technologies meeting their requirement. We believe this will facilitate market adoption of solutions that come with IDex rankings.”

The IDex was developed by the independent international engineering body, IEEE Standards Association. It defines the mechanism and specifications for evaluation, grading and performance ranking of IoT objects and sensors, ranging from devices to the entire systems. It classifies the IoT objects into multiple levels of performance and gives an indication of the performance capabilities.