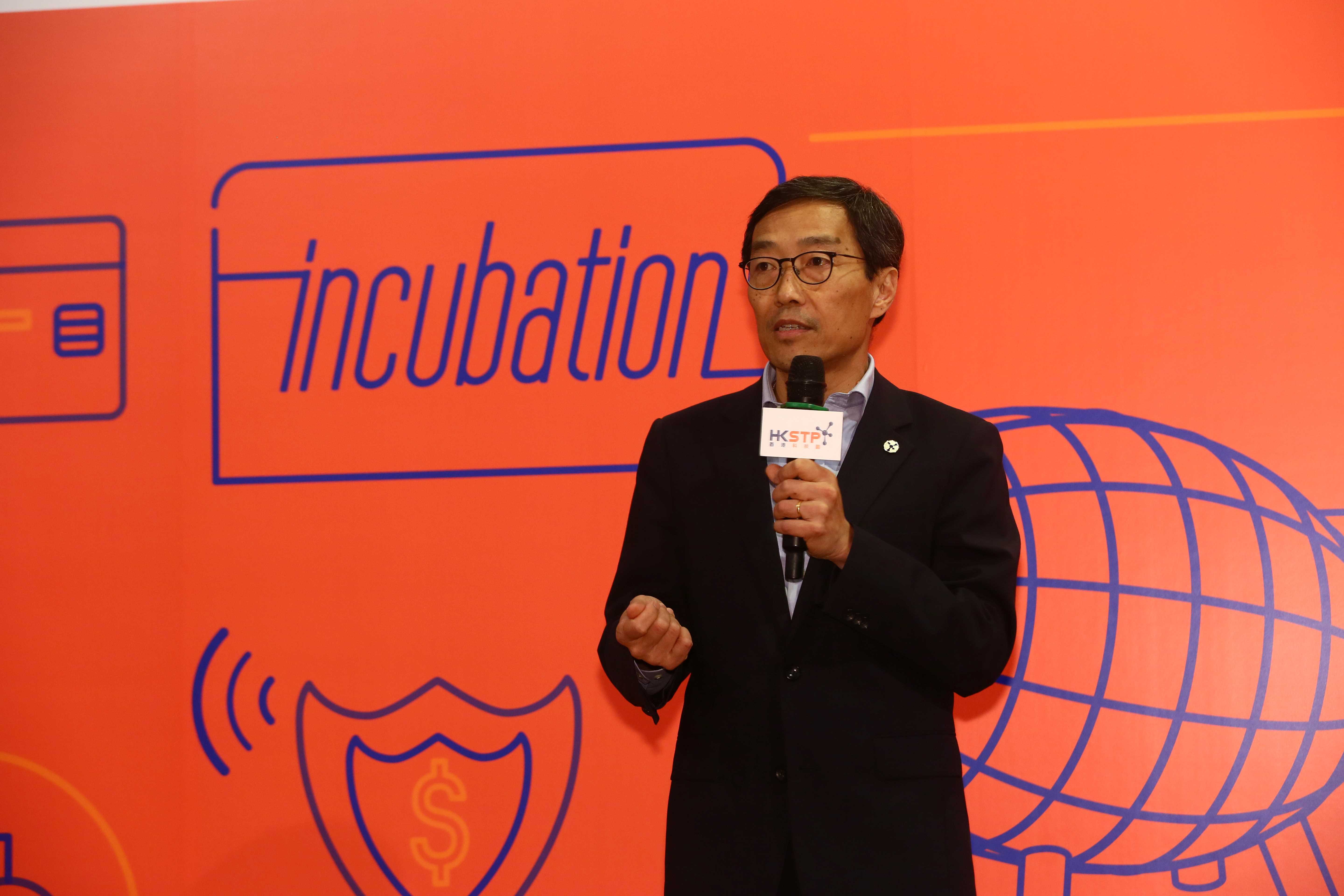 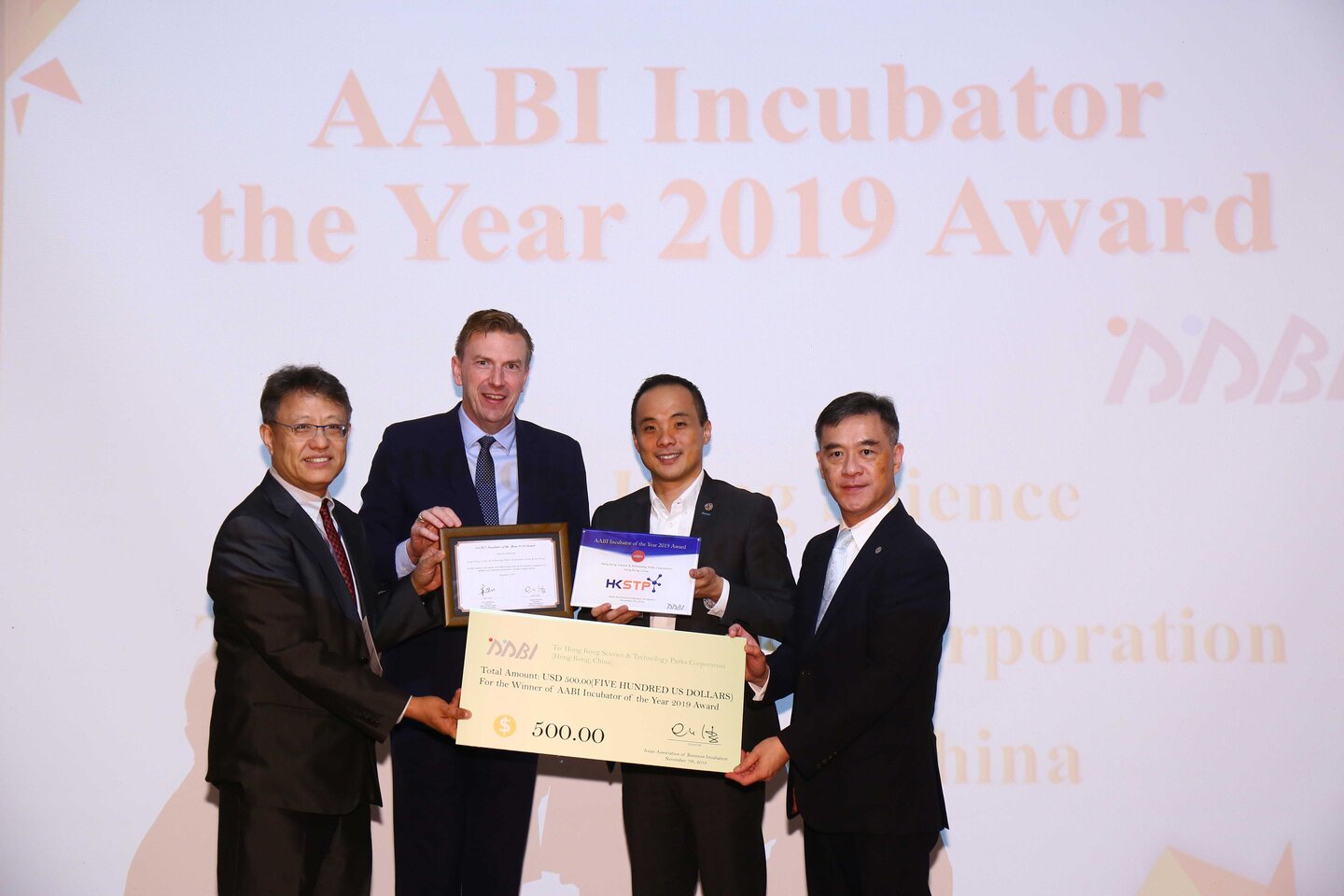 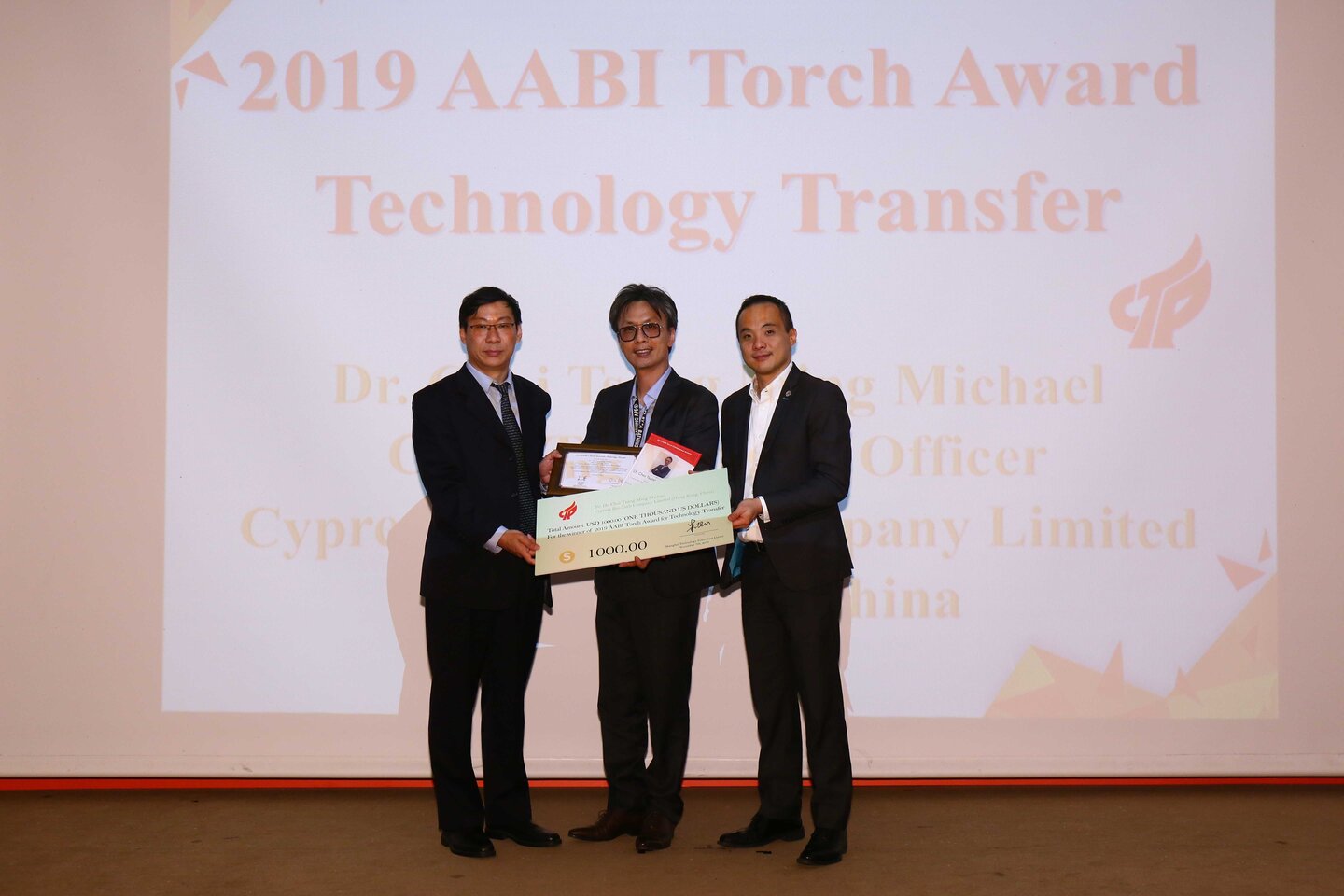 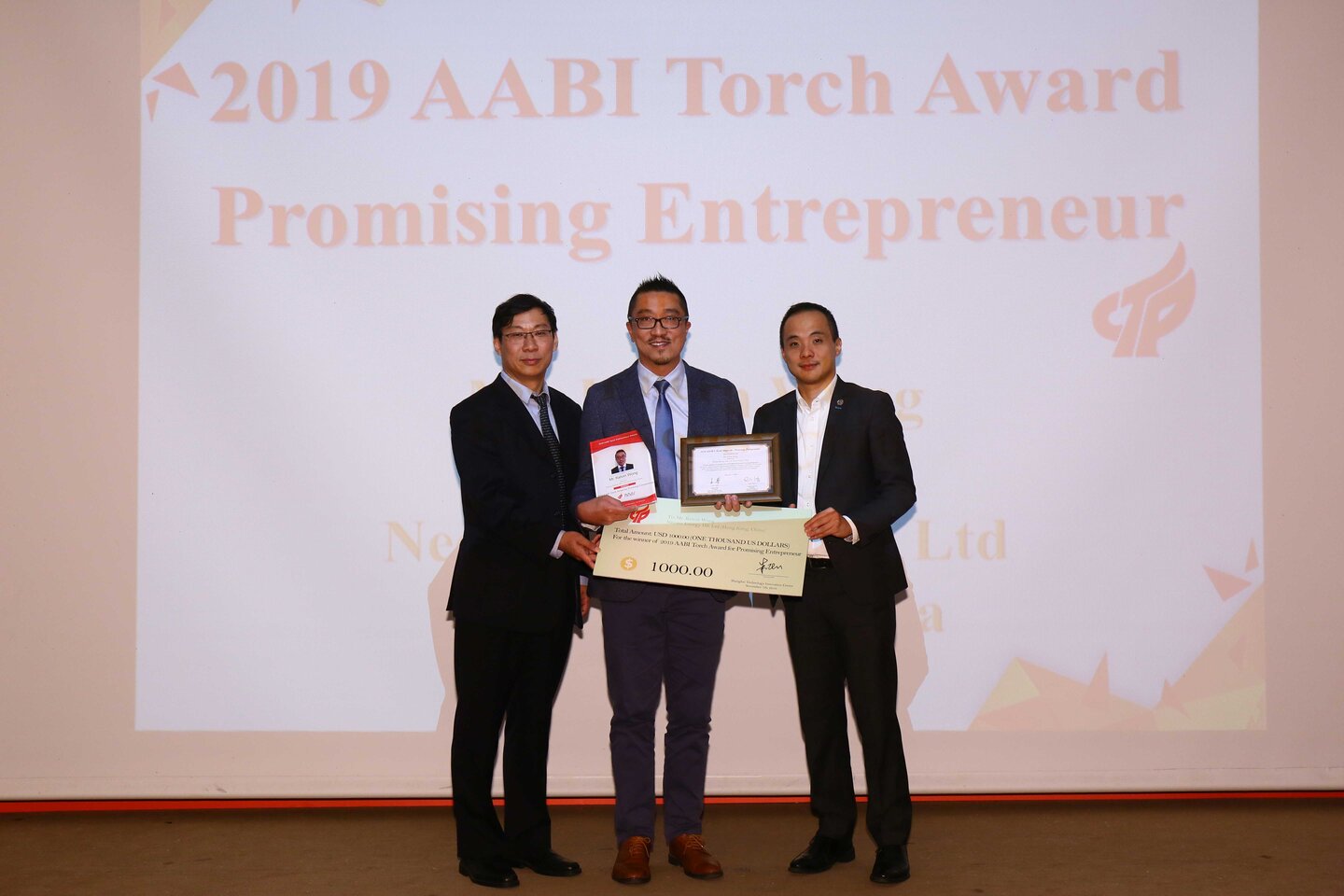 Cypress Bio-Tech, an incubatee of Hong Kong Science and Technology Parks Corporation, and Neosen Energy, a graduate incubate from the Corporation, earned recognition from the Asian Association of Business Incubation for their outstanding innovations and contributions to the global start-up community. Dr. Michael Choi, Chief Technology Officer of Cypress Bio-Tech (Middle on top), received the AABI Torch Award for Technology Transfer, and Kelvin Wong (Middle on bottom), Director of Neosen Energy, took home the AABI Torch Award for Promising Entrepreneur. 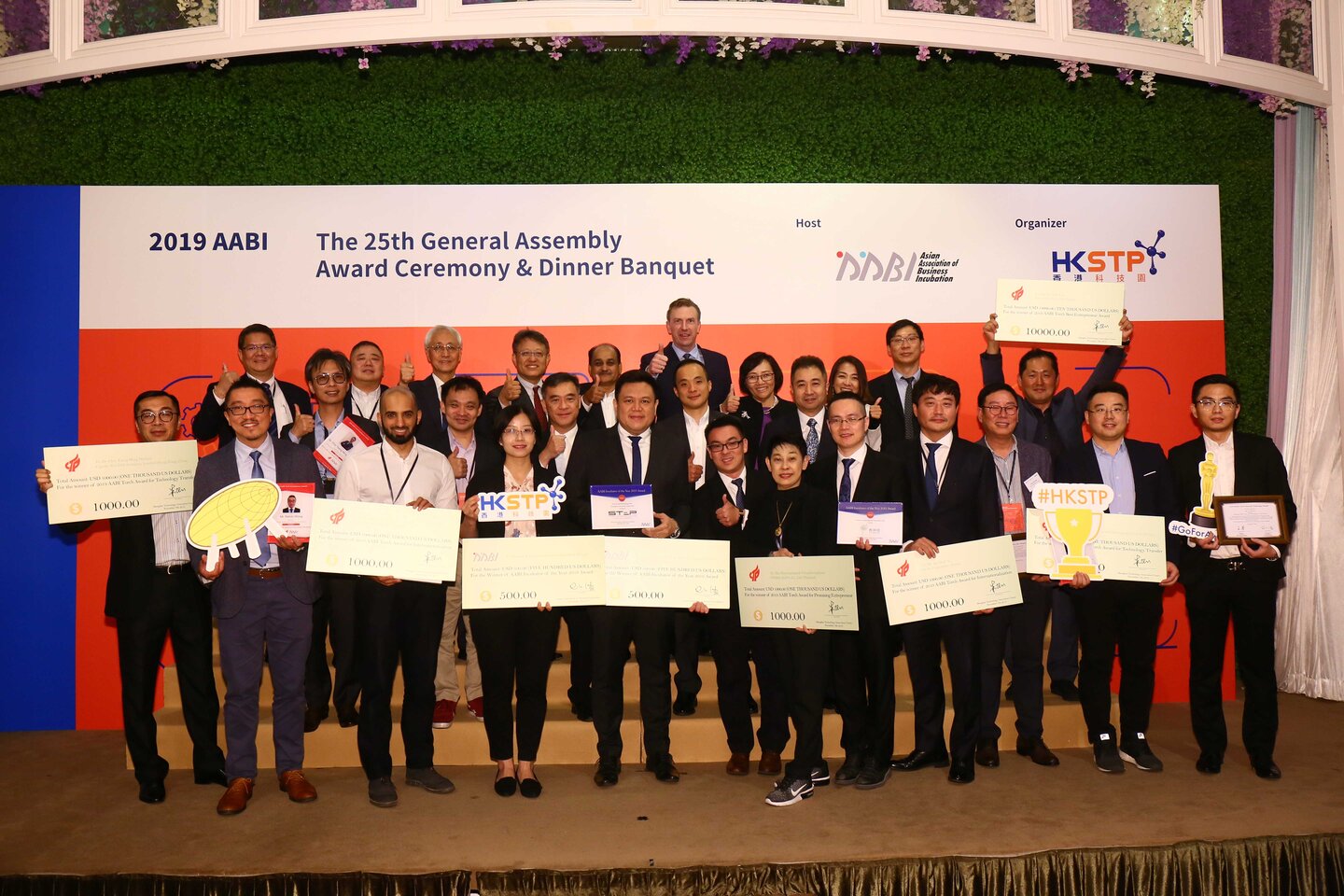 Delegates from the Asian Association of Business Incubation gathered at Hong Kong Science Park to share trends and views on how to boost the incubation industry ecosystem in the region.

Hong Kong, 7 November 2019 – Hong Kong Science and Technology Parks Corporation (HKSTP) today garnered the Incubator of the Year at the Asian Association of Business Incubation (AABI) Awards Ceremony 2019, in recognition of its outstanding performance in catalysing the growth and success of technology startups through its incubation programmes.

AABI is the leading organisation promoting business incubation and entrepreneurship in 19 economies across the Asia-Pacific region. Assessed by a heavyweight panel of judges comprising 23 association members and 36 incubator members, AABI annually honours among its member organisations with the prestigious Incubator of the Year Award, as well as the Torch Awards for outstanding startups.

“We are honoured to be awarded the Incubator of the Year,” said Albert Wong, Chief Executive Officer of HKSTP. “HKSTP strives to make the best use of the government’s funding support to introduce new initiatives, enhance our current programmes and support services to cater to the needs of tech companies at different stages of their development. This award is a testimony to our sustained efforts in accelerating the growth of our graduate incubatees, now numbering more than 600. This award is also a recognition of the support of our partners, experts and mentors who have actively supported HKSTP in nurturing innovation, technology and entrepreneurship in the city.”

Earlier in March, HKSTP honoured 80 companies for completing their Incubation Programmes – Incu-App, Incu-Tech, and/or Incu-Bio – a record number of graduates in a single year. The graduates, coming from Hong Kong and overseas such as Canada, Russia and the United States, have won 99 innovation awards, filed or registered 38 patents, and raised a total of HK$ 134 million from angel investments and venture capital funding.

AABI has also recognised Cypress Bio-Tech and Neosen Energy with the Torch Awards for their outstanding work.

Cypress Bio-Tech, an incubatee of HKSTP, received the Torch Award for Technology Transfer for developing a unique textile impregnation treatment that repels biting insects in a safe, effective and user-friendly way. They were recognised for facilitating knowledge and technology transfer on their patented insect repellent technology with universities and research institutes in the United States and Taiwan.

“AABI’s recognition of Cypress Bio-Tech and Neosen Energy is a clear indication that Hong Kong’s R&D capabilities and innovations have reached the global stage. Their success is our success, and a motivation for HKSTP to achieve even more for our start-ups,” Albert added.

The 25th General Assembly of AABI was held in Hong Kong for the first time, at the Science Park. As host, HKSTP organised a three-day tour for more than 30 AABI members. Business matching and networking opportunities were also part of the tour. Four AABI-nominated startups will take part in EPiC – HKSTP’s signature elevator pitch competition to be held on 8 November at International Commerce Centre. They will get the opportunity to pitch their business ideas to a panel of judges and investors and compete with more than 100 entrants from 33 economies and cities for the top cash prize of over HK$1 million.