Albert Wong, CEO of HKSTP, speaking on HKSTP's various initiatives to increase R&D and investment support for start-ups and enterprises at a media briefing, held at the Elevator Pitch Competition 2019. 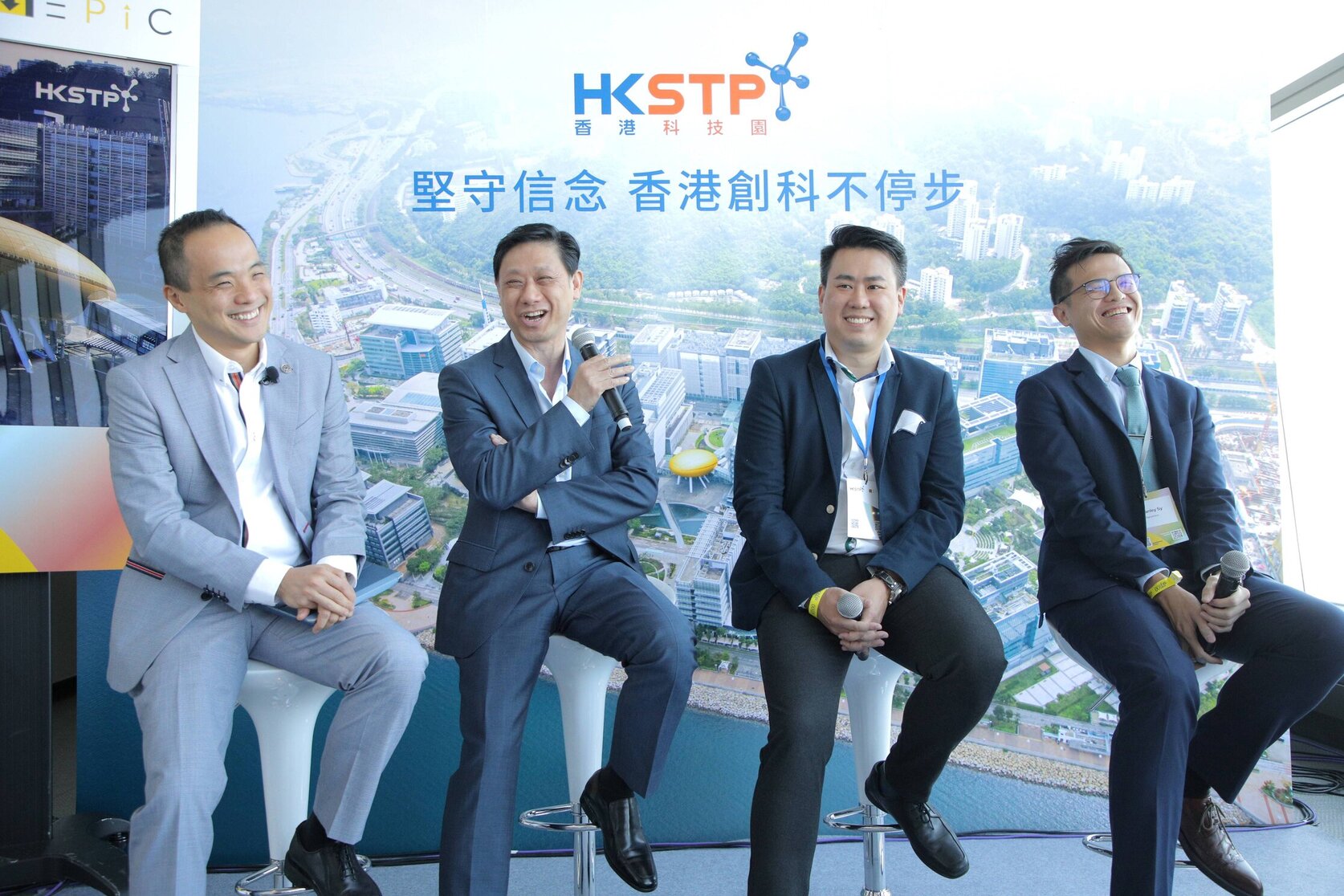 (From left) George Tee, CTO of HKSTP had a sharing session with representatives of ELITE partners including Victor Chan, CFO of ACT Genomics, Dr. Albert Lam, Chief Scientist and CTO of Fano Labs and Stanley Sy, CEO of Sanomics on the advantages of setting up Hong Kong-based R&D operations in Science Park.

HKSTP’s management team and representatives of ELITE partners took a photo. (From left):

These initiatives are aimed at building on top of the major milestones HKSTP has achieved for Hong Kong’s I&T sector. Some of these achievements include growing Science Park’s I&T community to more than 800 companies coming from 22 countries and regions and nurturing more than 640 incubatees from its world-class incubation and acceleration programmes. In the area of investments, to date, HKSTP has helped partner companies and incubatees raise more than HK$0.6 billion.

From the HK$10 billion government funding support announced last year, HKSTP’s incubation programmes were boosted and they received overwhelming interest from the start-up community. The Science and Technology Entrepreneur Programme (STEP) received more than 300 applications from individuals and business entities, with 70 teams now admitted in the programme. The increased financial support for Incu-App, Incu-Tech and Incu-Bio incubation programmes also attracted over 600 applications and enquiries in the past year.

Having the top-notch talent and knowledge transfer is key for Hong Kong to leapfrog and accelerate I&T development into new areas. In June this year, HKSTP rolled out the ELITE programme, a major partnership initiative to attract high-potential tech companies from local and around the world with pioneering R&D capabilities to set up or expand their R&D operations at Hong Kong Science Park. Partner companies with successful application will receive HKSTP’s funding support for R&D operating and capital expenditure, as well as rental subsidies. To date, five companies have been admitted in the programme and they focus on R&D in bio-medical, electronics, and information communications technologies (ICT).

To reflect HKSTP’s increased commitment to supporting tech innovators at the various stages of their start-up journeys, the highly successful pilot funding programme, Corporate Venture Fund (CVF), is rebranded as HKSTP Ventures. First launched in 2015 and operating under a corporate co-investment model, the fund connects high-calibre start-ups with public and private funding in Hong Kong and beyond. In FY2018/19, every HK$1 of the CVF fund was matched by HK$13 from the private sector. Up to September 2019, approximately 35 private sector investors were engaged under the fund.

Expansion and development for sustained growth

Stage one of the Science Park Expansion Programme has been completed. Two research clusters under the InnoHK initiative, AIR@InnoHK and Health@InnoHK, will soon start operations and look into groundbreaking R&D for AI & robotics and healthcare. The soon-to-be-launched Robotics Catalysing Centre 2.0 will focus on driving robotics development and adoption in various industries, such as manufacturing, construction and healthcare.

HKSTP is also exploring avenues to extend its footprint beyond its current premises through collaborations with the larger Hong Kong community. HKSTP has started a new university collaboration model that will drive knowledge transfer, strengthen academia-industry alliances, nurture young technopreneurs and commercialisation opportunities of university spin-offs.

To align with the HKSAR Government’s re-industrialisation initiative, HKSTP has engaged local and overseas manufacturers and new economy industries to understand their requirements for advanced manufacturing. Based on their insights, HKSTP is currently installing advanced facilities and support services that will meet the stringent requirements of their production processes, such as intellectual property (IP) protection, intensive R&D, proprietary fabrication and testing techniques. These moves will also give existing companies in the three HKSTP-managed industrial estates an opportunity to upgrade their current processes for enhanced productivity and improved quality of production.

“We at HKSTP have always believed that research and development is the seed for innovation and creativity to thrive. We have already laid a good foundation for our I&T ecosystem and will stay focused on our efforts to help technopreneurs turn ideas into commercial products and services and support the growth of the community.

It is time that we re-think and re-assess what our economy and industries mean for Hong Kong. The future is digital, and we must collaborate with our partners and major stakeholders to support Hong Kong and our industries on this transformative journey. We have to build a people-centric community imbued with a culture of continuous learning and driven to innovate, at work and at play. This will provide the engine for Hong Kong’s sustained growth, socially and economically,” said Albert Wong, CEO, Hong Kong Science and Technology Parks Corporation.