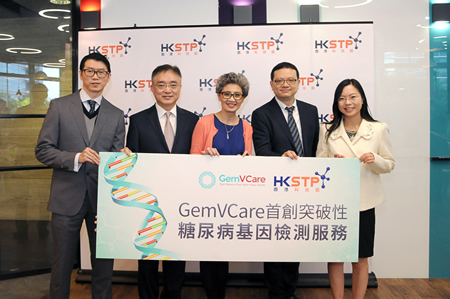 GemVCare’s founding team began the research at the Chinese Unversity of Hong Kong some 20 years ago, as diabetes is estimated to affect as many as 600 million people globally, or one in every 10 people in the world, by 2040. Their research focused on finding the link between Asians and diabetes, due to higher incidences of the disease occurring among Asians (presently, 60% of the world’s diabetes patients are Asian).

Due to the silent nature of diabetes and its complications, many are not diagnosed and therefore not treated nor controlled. In order to find reliable predictive means for diabetes so that a healthy person can take preventative measures, the team conducted clinical studies of Asian diabetes patients in the last 20 years and developed databases that point to a panel of Chinese/Asian-relevant genetic markers which can be used to predict and prevent diabetes and lead to personalised care for those with or at risk of diabetes.

The breakthrough led the development of accessible predictive genetic tests of diabetes that are expected to benefit at least 2-3 million people in Hong Kong alone, and will have much wider application to millions of people of Chinese and Asian descent around the world.

Asians at higher risk of diabetes and its debilitating complications

Dr. Juliana Chan, Chairman of GemVCare, thinks that raising the awarenesss of diabetes is the first line of defence against this “silent killer”. In the years of diabetes research, she has witnessesd the debilitating effect of diabetes and its complications. “It’s not uncommon to see diabetes leading to heart disease, kidney disease and eye problems. I have seen a young patient in her 20s losing her sight because of diabetes. We checked her family health history and found that her elder sister was also diagnosed with diabetes in her 20s. This is relatively rare among westerners. This led me to focus on finding a diabetes preventative solution for Asians.”

Dr. Chan has been leading the research team of the Chinese University of Hong Kong since the 1990s. She observed the genetic links of diabetes, and found that diabetes is also linked to age, smoking or obesity. She later set up The Hong Kong Diabetes Registry with the medical team of the Prince of Wales Hospital. The goal is to create an Asian clinical databases of diabetes to help doctors and patients make early decisions on lifestyle changes or treatments.

The team has recruited 20,000 Asians for the study, with the consent of the patients and their families as well as healthy volunteers. The team set out to identify the causes and effects of diabetes and related complications. As diabetes is a common chronic disease with complex causes, it is challenging to accurately predict how likely an individual would develop diabetes. Under the leadership of Dr Chan, the research team made a break-through discovery that Asians have a panel of genetic markers which interact with lifestyle and other modifiable risk factors to predict diabetes and its complications. This discovery has gained patents from China and the USA. With the support of Innovation and Technology Commission and The Office of Research and Knowledge Transfer Services at The Chinese University of Hong Kong, the research project was commercialized into genetic test services. GemVCare was officially founded in 2014.

The project was supported by more than HKD 400 million competitive grants and donations over the years, and more than 100 knowledge workers have been trained to help build the genetic and clinical databases. Other scientists, among them, actuarial scientists, geneticists, biologists and bio-infomatic scientists, also contributed to the successs of the project. “We closely examined every case and have built a database of 20 years of clinical research data. We found the correlations of the data through advanced algorithms and developed quick and precise genetic tests to identify subjects at risk for diabetes,” Dr Chan said.

GemVCare offers two forms of tests, for predicting diabetes risks in healthy people and for predicting the risk of complications in patients with diabetes. The tests have been piloted in some clinics and are officially launched today. The budget-friendly tests will help people find out how much they are at risk of becoming diabetic over time and what they can do to change the trajectory. Dr Chan said that the community in Asia prone to high-risk habits is at high risk of diabetes. This makes it even more important for people in this part of the world to find out if they are in the high-risk group. “In the case of Hong Kong, 30% of our population is overweight or have high blood pressure or abnormal lipids. One in four families has a member affected by diabetes, 10% of people are smokers, 10% of children have obesity and one in eight pregnancies are affected by gestational diabetes, all of whom are potential users of this technology.”

“In general, every one in 10 people is at risk of becoming diabetic. This risk gets higher as age goes up. In the age group of 55, every one in five people is at risk. Other than genetics and age reasons, smoking and overweight are major contributing environmental factors. It has now been proven beyond doubt that changing and embracing a healthy lifestyle can delay or prevent the onset of diabetes, while quality diabetes care can substantially reduce the risks of complications and critical illnesses,” added Dr. Juliana Chan.

GemVCare believes that everyone has the power to stay healthy. It has developed a mobile app in conjunction with the genetic tests that will empower people undertaking the tests to manage their own health through the tests, and reduce the risks of diabetes and related complications.

Andrew Young, Chief Commercial Officer of HKSTP, said: “Since the Innovation and Technology Commission (ITC) of HKSAR introduced the Technology Start-up Support Scheme for Universities (TSSSU) in 2014, HKSTP has been driving the commercialisation of the research efforts of local universities. GemVCare’s latest achievement in diabetes research is a success story of knowledge transfer from the universities, and will benefit the whole society, and by extension, our economy, as it empowers people to make smart decisions about their health and their family’s. HKSTP embraces GemVCare in our Incu-Bio Programme, and is very glad to see that GemVCare makes the milestone of sharing breakthrough diabetes tests with the world, having benefited from the full range of services provided under HKSTP’s incubation programme.”