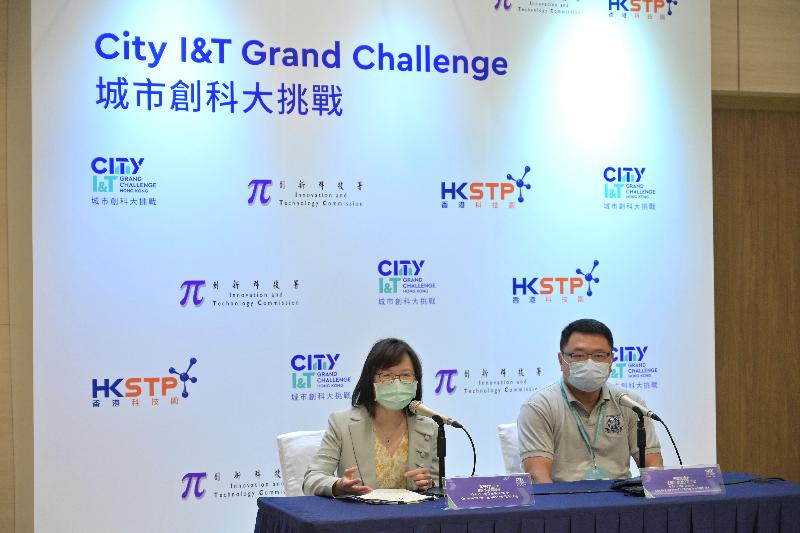 The Commissioner for Innovation and Technology, Ms Rebecca Pun (left), and the Chairman of the Board of Directors of the Hong Kong Science and Technology Parks Corporation, Dr Sunny Chai (right), meet the media after the first City I&T Grand Challenge today (October 16).

​(Hong Kong, October 16, 2021) ​Organised by the Innovation and Technology Commission (ITC) together with the Hong Kong Science and Technology Parks Corporation (HKSTP), Hong Kong's first ever City I&T Grand Challenge concluded its two-day Grand Pitch and Finale at Hong Kong Science Park today (October 16). Winners from four categories were selected by a judging panel consisting of nine representatives from the government, industry, academic and research sectors, the competition concluded with a great success.

Over 600 guests from all walks of life as well as online audience celebrated the next generation of innovators, who tackle problems with innovative solutions under the new normal.

Under the theme of "Innovating for Hong Kong's New Normal', the City I&T Grand Challenge invites different sectors of the community to develop I&T solutions focusing on two topics, namely "environmental sustainability" and "social connectivity". In an effort to enhance the awareness of I&T to new audiences and introduce technology opportunities to a broader group of future entrepreneurs, the competition is divided into four categories, including primary school, secondary school, university/tertiary institute and open group. The event has received more than 740 submissions from over 1 250 local and non-local contestants on an individual or team basis. A total of 120 solutions were shortlisted to enter the Grand Pitch on October 15, and 24 of them went all the way to the Finale to compete for the top prizes today. In addition to cash prizes and trophies, winners of the university/tertiary institute and open groups will be given financial support for research and development as well as professional training sessions for refining their I&T solutions for trials at designated venues such as government departments or public organisations. These would provide opportunities for these up-and-coming innovators to turn their ideas into real-world solutions.

At the award presentation ceremony, the Chief Executive, Mrs Carrie Lam, said "in the past four years, the HKSAR Government has adopted an eight-pronged approach to develop I&T. So far, the Government has allocated over HK$130 billion to implement various projects. The I&T development in Hong Kong is highly recognised and supported by the Central Government. In particular, the National 14th Five-Year Plan clearly supports Hong Kong to develop as an international I&T hub." The 2021 Policy Address announced last week stated that Hong Kong's I&T industry was flourishing at the moment. To sustain this good momentum, Hong Kong was keen to develop a more comprehensive I&T ecosystem. Therefore, the Policy Address announced further measures, which consist of providing additional 150 hectares of land in the Northern Metropolis plan for I&T use, developing the San Tin Technopole, and setting up of InnoLife Healthtech Hub, etc. She was confident that Hong Kong's future I&T development would turn Hong Kong into an international I&T hub which would complement Hong Kong's position as an international financial centre in driving its future economic development.

In his welcoming remarks at the Grand Pitch, the Secretary for Innovation and Technology, Mr Alfred Sit, said, "The objective of organising the event is to explore I&T solutions that are closely related to daily lives and answer the needs of specific communities." He further stated, "We strongly believe that I&T talents should be developed since early age. We have to build different platforms to broaden their visions, as well as promote young people's care about the need of our society and make the best use of their knowledge to solve problems of the general public."

Commissioner for Innovation and Technology, Ms Rebecca Pun, congratulated the winners at a media briefing and said the result had illustrated that their solutions were endorsed by the judges throughout the four stages. She added that winners of the university/tertiary institute and open groups would receive support from account managers and mentors when they subsequently entered into the trial and adoption phase. They would also be provided with trainings and be sponsored for the prototype production for trial run in government departments or public organisations.

Dr Sunny Chai, the Chairman of the Board of Directors of the HKSTP said, "HKSTP firmly believes attracting and nurturing I&T talents are critical for supporting the development of Hong Kong into a world's leading I&T hub and we have been striving to provide opportunities to local youngsters who aspire to become our future I&T leaders by leveraging the strengths of our combined network of government, industry, academic and research partners. The City I&T Grand Challenge is a great example of our partnership with Government and has proven to be an effective and inspirational showcase of our growing I&T talents."

The City I&T Grand Challenge was launched on December 18 last year to blend I&T in people's daily lives and inspire a fervid I&T atmosphere. Since then, the competition has undergone multiple phases, including the online judging in July, five-day semi-pitch on September 11 to 15 to shortlist a total of 120 solutions to enter the Grand Pitch. Extensive training and guidance were provided to all participants, including a series of online seminars, training workshops and visit activities. Over 20 local university scholars across the disciplines of mechanical engineering, physics, chemistry and biological engineering, and computer science from The Hong Kong Academy of Sciences were also invited to mentor participants from the primary school and secondary school categories.