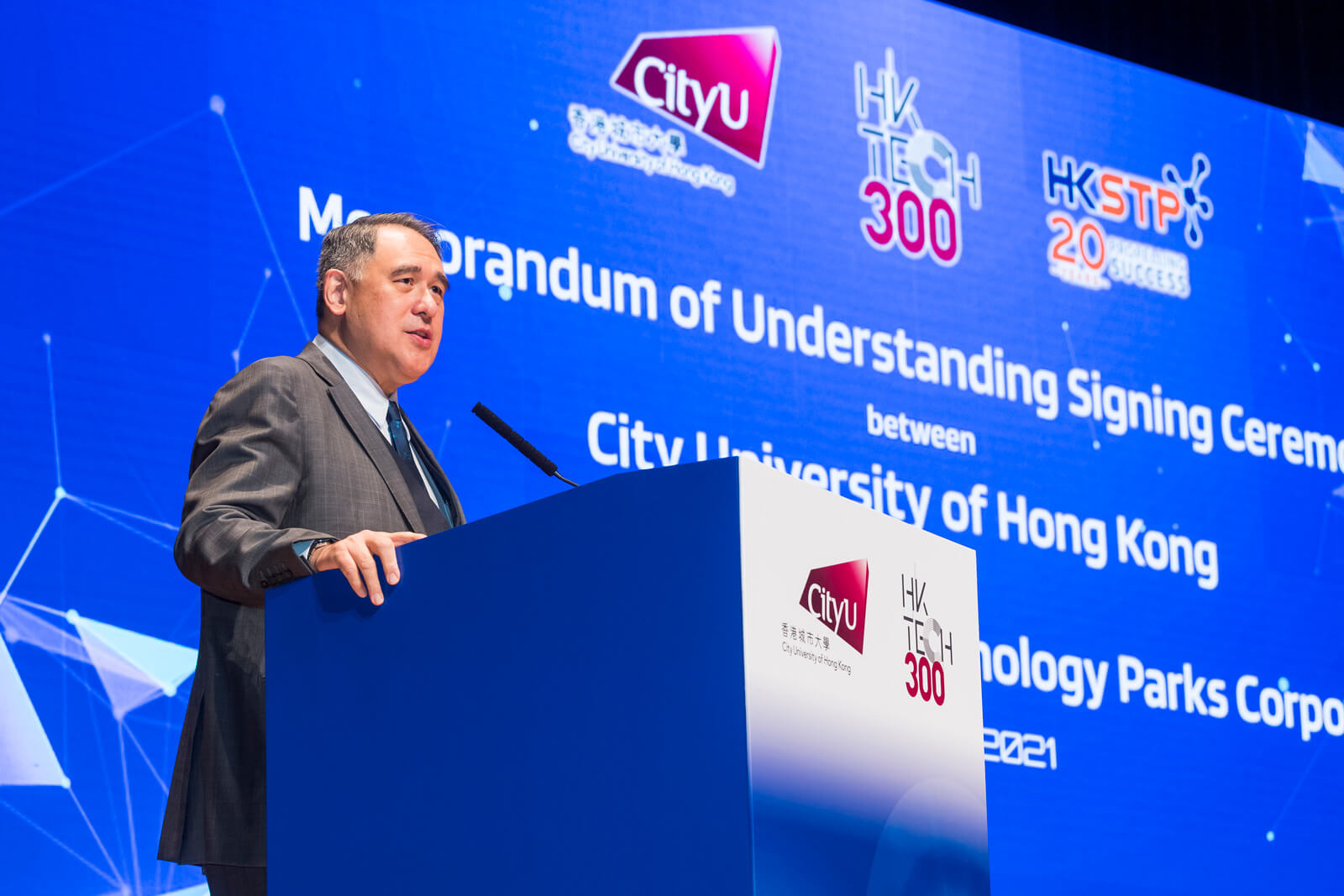 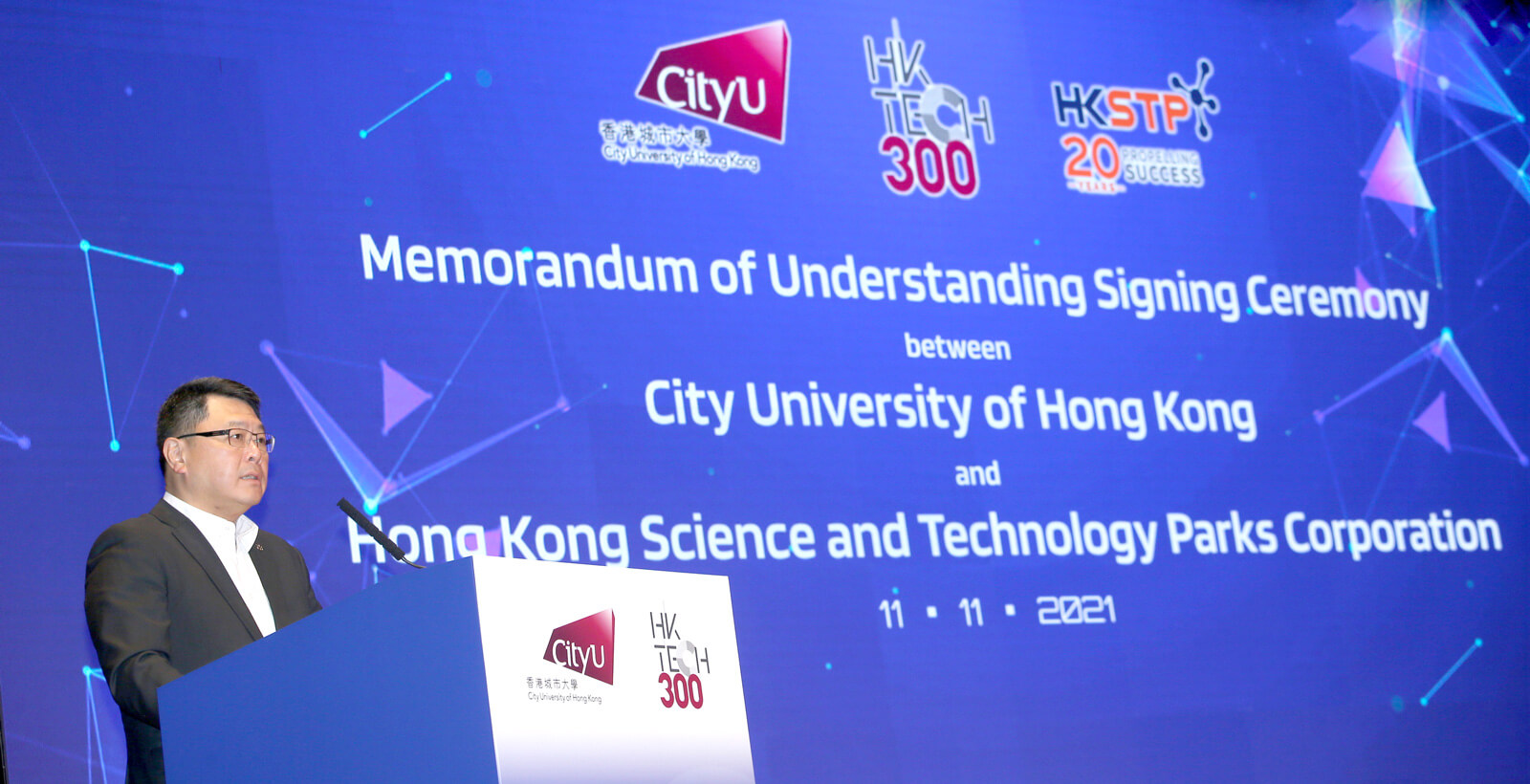 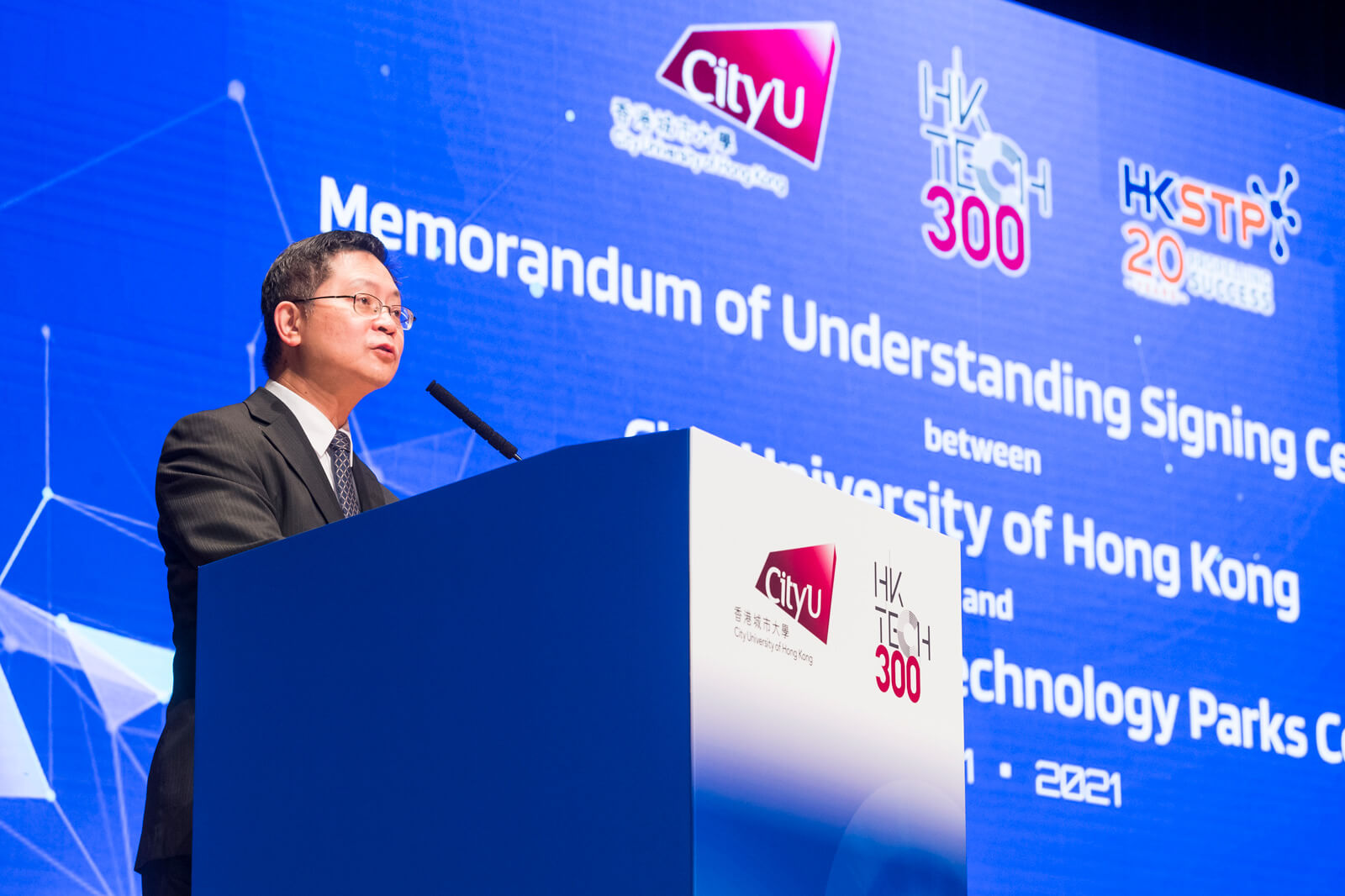 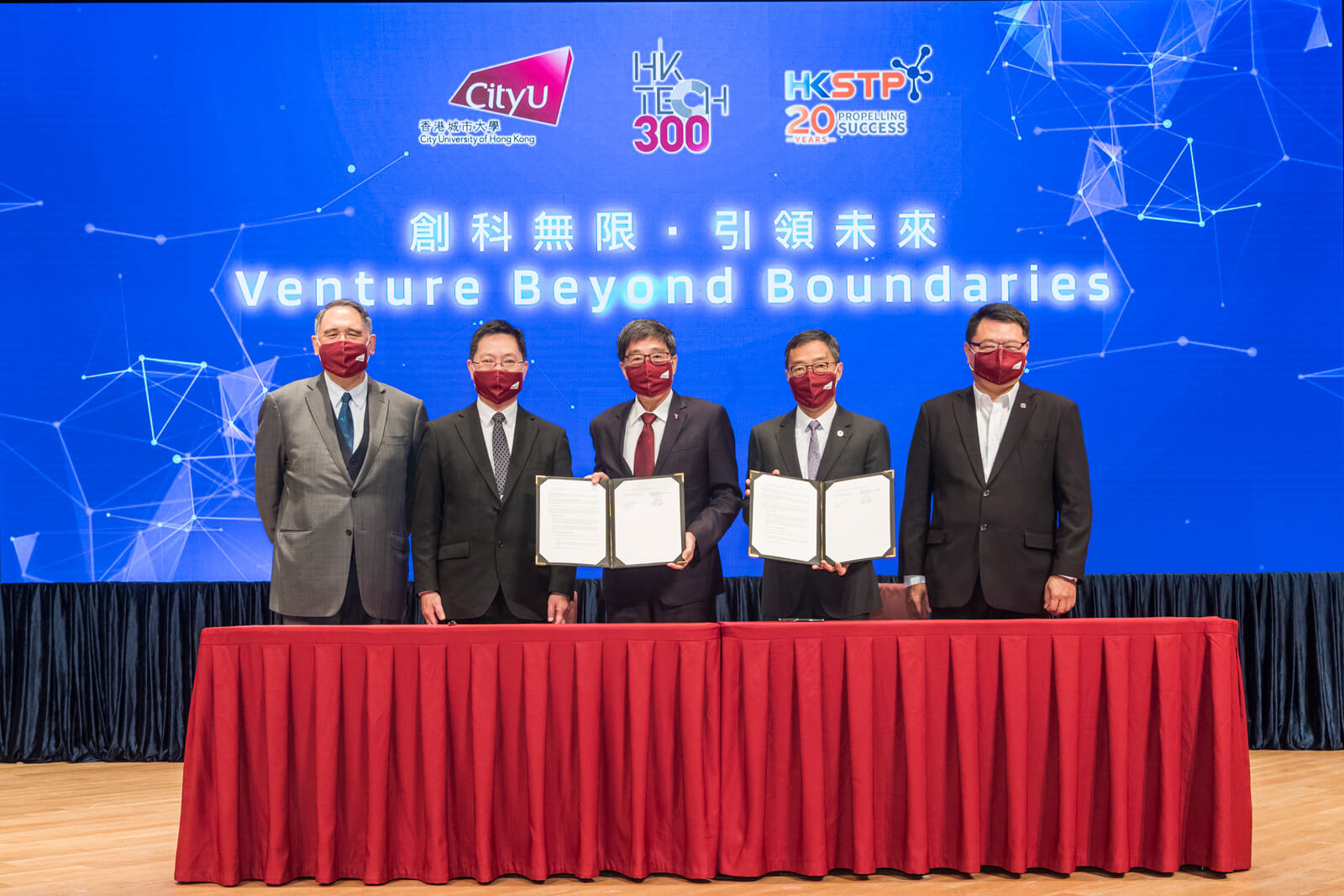 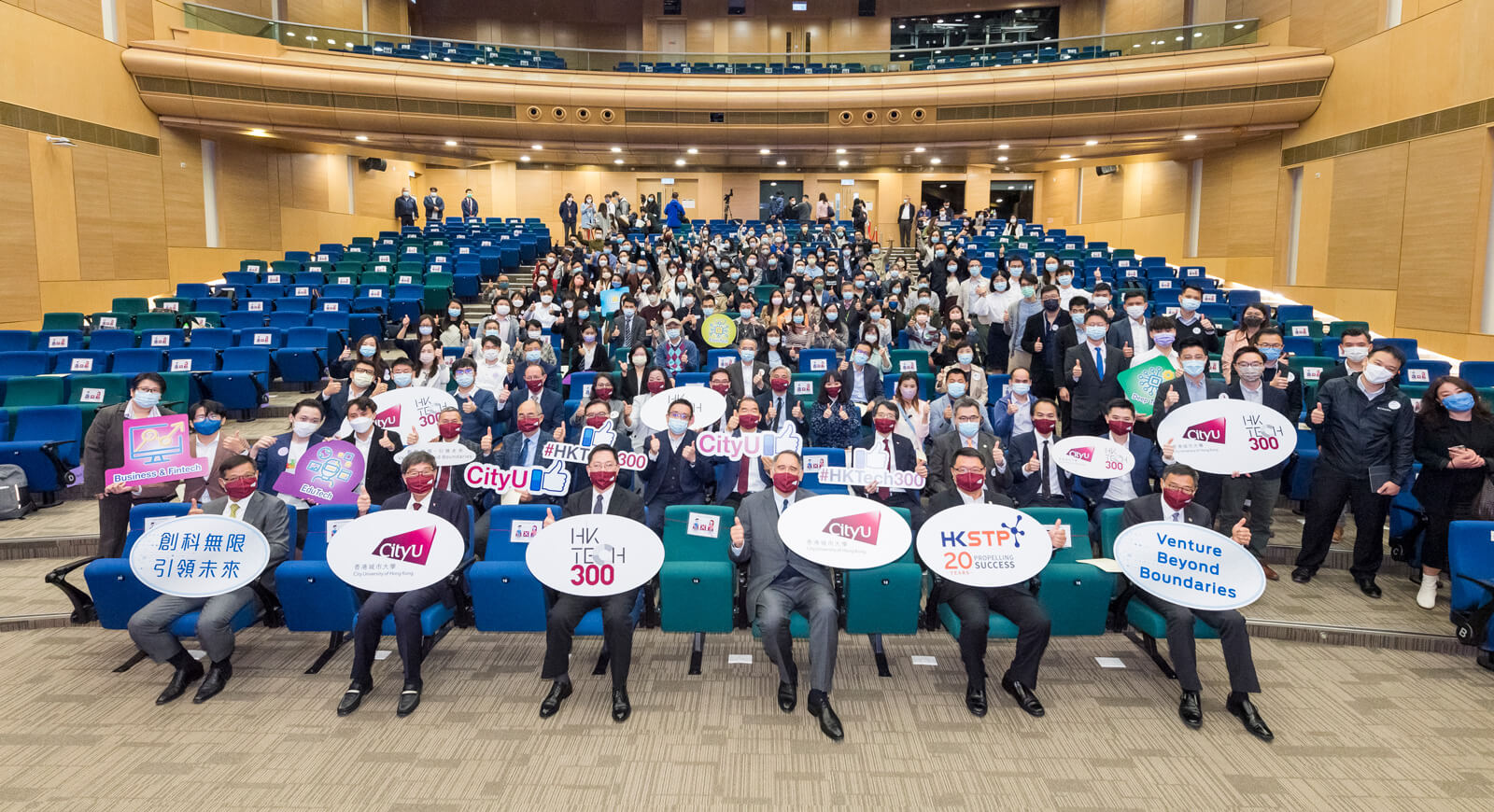 Photo 5: Representatives from the 62 start-up teams co-incubated by CityU and HKSTP and guests attended the event. 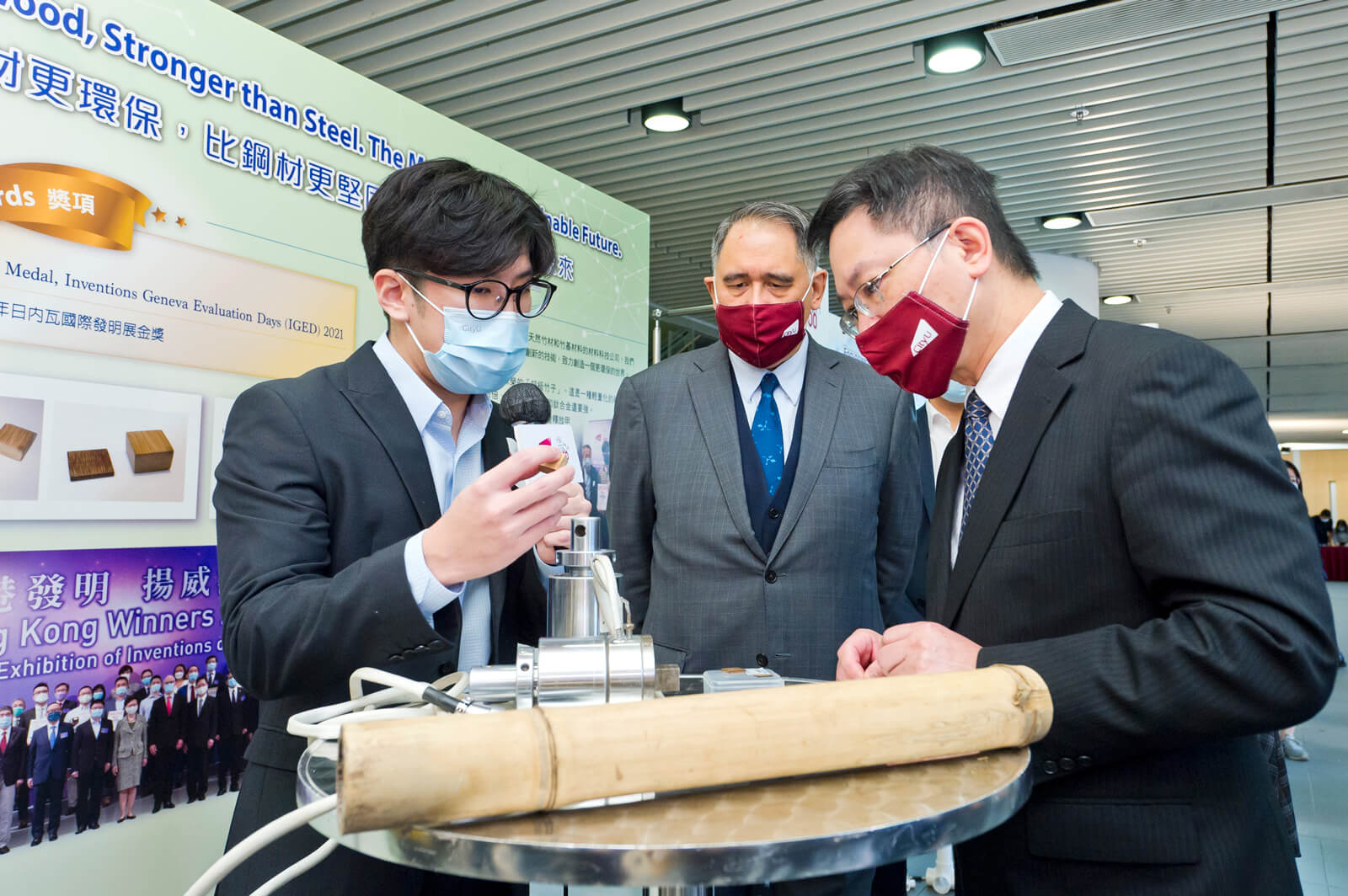 Photo 6: The jointly incubated start-up teams selected by HK Tech 300 and HKSTP introduced their projects to the guests.

In March this year, Professor Way Kuo, CityU’s President and University Distinguished Professor, announced the launch of HK Tech 300, a large-scale flagship innovation and entrepreneurship programme with an allocation of HK$500 million. The initiative has received tremendous support from different stakeholders across society, including HKSTP, which is one of the strategic partners. In the first three rounds of “HK Tech 300 Seed Fund”, a total of 152 start-up teams have been awarded HK$100,000 each, and among them, 62 teams have been admitted to HKSTP’s IDEATION pre-incubation programme.

To strengthen their collaboration, CityU and HKSTP have signed the MoU. HKSTP will provide seed funds and other support for start-up teams selected by both parties through the IDEATION programme and the incubation programme. Investment funding support from both parties will be provided to HK Tech 300 start-up projects. CityU and HKSTP will also collaborate on nurturing talent and further promoting technology transfer, enterprise innovation as well as innovation and technology in the GBA.

The MoU was signed by President Kuo and Mr Albert Wong Hak-Keung, HKSTP’s CEO. It was witnessed by Mr Alfred Sit Wing-hang, Secretary for Innovation and Technology, HKSAR, Dr Sunny Chai Ngai-chiu, Chairman of HKSTP, Mr Lester Garson Huang, Chairman of the Council of CityU, representatives from those 62 start-up teams co-incubated by CityU and HKSTP, and attending guests.

Mr Sit highlighted in his speech how crucial innovation and technology are to social development and reaffirmed the Government’s solid commitment. The coupling of CityU's innovation and HKSTP's R&D base under the MoU today will certainly give an extra boost to our start-ups.

Mr Huang said, “CityU has always been committed to promoting innovation and technology. HK Tech 300 represents a unique opportunity for young people and researchers to pursue their aspirations. We are very grateful for the great support from HKSTP since the launch of the HK Tech 300 programme.”

In his speech, Dr Chai said, “HKSTP is approaching 20 years of leading the development of innovation in Hong Kong. Adhering to our well-developed strategies, we will nurture top talent from HK Tech 300 into future pioneers, and transform their bright ideas into game-changing innovations.”