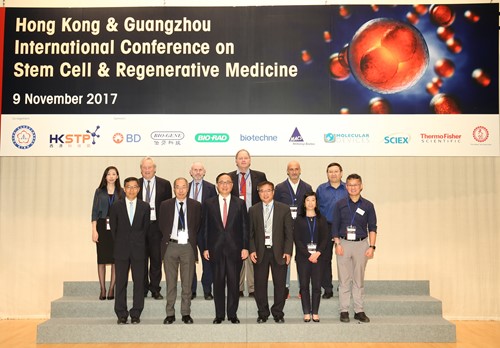 The conference was staged as HKSTP and GIBH developed closer links after GIBH announced in last year’s conference the establishment of the GIBH’s Hong Kong Centre at Hong Kong Science Park. In July this year, the Centre opened the demonstration and exhibition unit and R&D office of its stem cell and regenerative medicine research centre to drive biomedical technology development and catalyse the interaction and collaboration among industry experts and the academia in related areas.

Opening the conference, HKSTP Chief Executive Officer Mr Albert Wong pointed to the strong emphasis that both Mainland China and Hong Kong are putting on innovation and technology and the immense opportunities for Hong Kong as the bridge between China and the rest of the world, given Hong Kong’s integral role in China’s plan of fostering the Greater Bay Area into a global innovation centre, and in facilitating China’s economic integration with the world and building the Belt and Road.

“We have one of the best medical systems in the world, a comprehensive Chinese clinical data record, two clinical trial centres that are accredited internationally, including the CFDA, an English-speaking environment, rule of law and freedom of information. We also have renowned clinicians and scientists who are well-connected to the global research community,” he said. “With an ageing population and an expanding middle-class in China, the demand for medical and health services is growing rapidly. Hong Kong is well-positioned to be a research and translational hub for advanced therapies targeted at the Chinese population and a gateway to the China market.”

The China-Hong Kong synergy was also underscored by Mr Cao of CAS, who highlighted the significance that both Mainland China Government and the HKSAR Government attach to stem cell and regenerative medicine. “China is the best for science innovation nowadays.

The Hong Kong region is excellent for science innovation. Jointly, we make a bigger difference,” he said. “Stem cell and regenerative medicine is one of the fastest growing fields in modern biological science. Mainland China and Hong Kong attach much importance to this very exciting and promising field. With the inauguration of the GIBH Hong Kong centre at Hong Kong Science Park, I am sure the partnership with Hong Kong will not only flourish but also scale new heights in making contributions to global health.”

This conference on Stem Cell and Regeneration Medicine has grown significantly in international profile, evidenced by the calibre of the bio-medical experts speaking at the event. The keynote speaker of this year’s conference, Professor Tak-Wah Mak, is noted for his ground-breaking discovery of using immune checkpoint protein CTLA-4 and opening the path for immunotherapy/checkpoint inhibitors as a means of cancer treatment. In his keynote speech, Professor Mak, currently with the Departments of Medical Biophysics and Immunology, University of Toronto, revealed that two highly potent drugs have been developed after “spending 15 years looking for genes that are involved in maintaining genomic instability in highly aneuploid cancer cells”. The drugs have now entered phase two clinical trial on liver cancer which is funded by the Research Grants Council.

The important issue of enhancing Hong Kong’s regulatory environment for advanced therapy was examined again by a panel of local and international experts in a round-table discussion prior to the stem cell conference, as a follow up to the dialogue from last year’s event. Group convenor Professor Marc Turner, who is the Medical Director of Scottish National Blood Transfusion Service, shared that the group envisaged a single system of legislation covering the entire supply chain of advanced therapy, from cell and tissue procurement to transport of the manufactured materials and then applying to the patient. He said such system would be necessary for Hong Kong to become an international testbed for the development, manufacturing and clinical trialling of advanced therapies.

“If Hong Kong’s vision is to become an international centre of excellence in advanced therapies, I think it is important that you develop an overarching strategy which looks at all elements of your development, from academic research right through to clinical application and manufacturing, and work on all of those areas simultaneously.”